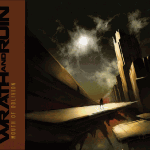 After an unprecedentedly long recording process, Wrath and Ruin released their first record “Mouth of Oblivion” in October. For over two years the Lawrence band had been recording and re-recording songs, rewriting segments, adding and subtracting song parts to satisfy their collective needs. During the time they endured changes, especially with vocalists and schedules, that threw the band off target for weeks, only leading to more edits and rewriting. Fortunately, and most unusually, the long methodical process has lead to one of the most focused, cohesive records I’ve heard from a local group in years. Even extending beyond the local perspective “Mouth of Oblivion” is a tightly knit unit, and is unapologetic in revealing itself to the listener.

The band’s sound is unconventional for a “Metal,” or forgive me for this, “Post-Metal” group. The tone is melodically lead by synth harmonies and lighter toned guitar harmonies that exist almost without edges. While that alone would usually have put me on edge, Troy Richardson and James Sizelove have avoided the temptation to write their parts from a cheesy sci-fi or horror rock perspective and instead have worked together to use musical cues to impart an eerily visual effect. To hear their work on songs like “Remnant” and “A World Without Light” is more like a film score than anything as petty as a song. Images of gathering storms and foreboding leak from the tracks. The “leads” communicate a definite sense of hopelessness and danger without resorting to stabbing shock tactics and dynamic carpet tugs to trick listeners into knowing that action is happening. It is simply there; a grim situation that a powerless audience must witness.

On the other end of the spectrum is the rhythm section. When you hear that Matthew and Jason Ramadan Khomsi are brothers it makes total sense. Of course these men have been in close quarters for years. To put it bluntly, the brothers are a damned machine on this record. Jason (on drums) flutters between carefully chosen blast beats, snapping back into heavy, driving rhythms at Matthew’s insistence, his bass lines a snarling dictator of chugging dramatic action. They run back and forth across each other, spurring each other on. At moments one may lean on the other, at others they surge forward with near unstoppable determination. The rhythm sections lines are almost ridiculously perfected. Months before the record was released, Producer Eric Graves sent me a raw track of just the drums and bass from the song “Lifeform” with a message. It read simply, “The fuck?!?” Listening to it in even the isolated form was moving. It was an abacus shattering line of wicked synchronicity. In direct contrast to Troy and James’ haunting lines creeping across a landscape like heavy fog, the drums and bass draw a straight line serving the goal of the music.

Tying it all together is Dean Edington’s vocals. Edington was a late addition to the group, coming in to write and record his parts almost a year and a half after primary recording had begun. Nonetheless his lyrical delivery (occasionally with Richardson and Sizelove) is impressive and builds a tonal bridge between the mood establishing leads and the punishing rhythms. He takes the dire tones that are built and commands the driving, assertive, drums and bass into action. Edington is confident and steadfast in his lyrics and imperious in his delivery. He delivers the message that as dark of a world as the band is building, there is a battle to be fought and won. Tonally he is reminiscent of Justin Broadrick (Godflesh/Jesu) at his most ethereal, at other times Scott Kelly (Neurosis) at his most cruel. When he delivers lines like, “I will not yield, I will not fail, Strength of body, Strength of will;” Edington illustrates scenes of overcoming adversity, refusing to be domineered or conquered, and accepting his fate in the case of failure. Basically he comes across as a man that if he tells you to row, you fucking row.

“Mouth of Oblivion” is an overall success, and a shockingly impressive first release. My only concern is that old cliché of, “All your life to record the first record, one year to make the second.” But seeing how the band has worked so far I don’t think they will succumb to it. The record is completely self released and was recorded and produced at their own discretion. It’s a testament to doing things according in your own way, being your own harshest critic, and not releasing anything until it meets your own high standards. The fact that a new group has found such a unified voice is impressive to say the least, and I simply cannot wait to hear what they do next.

Shows you should see this weekend: November 18-19