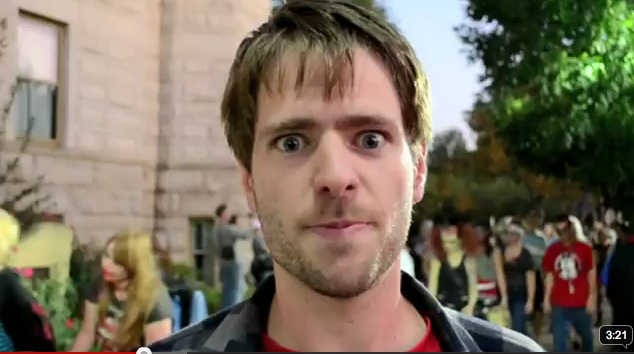 Facebook0Tweet0LinkedIn0Pin0
The music of Robocopter (aka Rob Schulte) is a work of art. You may have seen the local promoter sassing his way about the stage in BaioWolf, but his music is now taking a more focused, direct path.

Robocopter just premiered a new music video at the Wild West Film Fest. The video features footage from the Lawrence zombie walk, provided by Jessica Sain-Baird (we’ve featured her fabulous video work before). The song may discuss metaphorical zombies, but the real deal (or close to it) rules the video. “I’m a big fan of zombies,” says Schulte. “You’ve got hundreds of extras for your music video. You don’t get to see it much in the footage itself, but there were a lot of people coming up and yelling at me and having fun.”

Speaking of fun, Schulte has made a career out of the business of fun. He works with Pipeline Productions and helps promote shows across the city; and recently he’s been heavily involved with Lawrence’s most intense party-throwers, Team Bear Club. “They’re doing the best job of it,” says Schulte. “Everyone respects everyone else, they’re out to help everyone that’s independently trying to do something, but all trying to throw parties. It’s something that’s fun to go to, but you can create a piece of art with it that’s promoted by your friends.”

But it’s not all fun and games for Schulte. After a playful stint with BaioWolf, the artist made a decision to speak from the heart and launch a solo career. He’s hammering away at a five-track EP called “Dead With It,” inspired by the recent loss of his brother. “He was the biggest influence on music in my life,” says Schulte. “It gave me more of an awareness of life. He was one person that showed me how to independently find your own music and be able to create something yourself, or find artists who create something that speaks to you. I’m calling it ‘Dead With It’ for that heightened sense of being alive and respecting death.”

So now Schulte is focusing his attention on Robocopter, and planning it to perfection. “It makes me feel good that I’m creating something.”

View his creation below, and keep an eye out for a new EP.