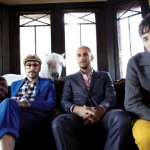 There will be more than thirty bands gracing the stages at Kanrocksas this weekend, but OK Go’s set is not one to miss. The band has a history of interacting with their fans and letting tomfoolery take center stage during their shows. We talked with OK Go’s Tim Nordwind just before the band’s upcoming stint at the festival.

The day we talked with Nordwind, OK Go had just released their new music video for “All Is Not Lost,” which allows fans to be interactive with the video. Whether it’s shooting the entire video in one take, using a Rube Goldberg machine, or utilizing HTML5, there never seems to be a shortage of creativity. “I mean really when it comes to video making, whatever it is that we make, we’re really just trying to chase the ideas that seem the most fun and exciting to make,” says Nordwind. “The more impossible things are, the more interested we are in trying to make the impossible possible.”

The focus of this latest video has been interaction. “My all time favorite way of interacting with people is making something and have them respond in some sort of creative way back,” says Nordwind. “A lot of times when we put out videos, we get [the fans] to put out their own versions.” Constructing ideas and putting them into motion is what puts Nordwind in his element. “I’ve always liked to make things,” says Nordwind. “I feel really lucky to have developed a career where we get to make lots of things on a weekly, monthly, yearly basis. I like to make things and share them.” 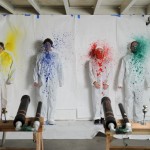 OK Go will get to share some of those ideas and performances this Saturday on the Ad Astra stage at the Kanrocksas music festival. The band, originally from Chicago, is no stranger to the Midwest. But Nordwind says there’s another reason the band feels more comfortable playing here. “We feel pretty comfortable playing there; we’ve always gotten really great responses,” says Nordwind. “It’s nice because other people aren’t really jaded. They’re still pretty excited about seeing shows and having a good time.”

That excitable attitude from Midwestern fans may very well play in the audience’s favor. OK Go is known for some theatrics at their shows, and Saturday’s will probably be no exception. “We’re going to try to pull out as many stops as we can at the festival,” says Nordwind. “Generally, we go at our shows like it’s a big party and everyone’s invited. Even in the live shows, it’s fun to expect the unexpected.”

See the unexpected this Saturday at 4:30 on the Ad Astra stage with OK Go.

Win tickets to Kanrocksas from I Heart Local Music