One of my favorite activities nowadays is listening to heated discussions about the upcoming Kanrocksas music festival. I love hearing the good, the bad and even the ugly debates. But I thought I’d throw my two cents in.

It’s more than okay to be critical and form your own opinion of the festival, but I can’t stand listening to folks within the community try to lead a crusade against the event. For one, it’s not their fight. I’ve heard some local musicians express a distaste for various individuals who try and declare themselves as the voice of the music community, and urge “boycotts” of the festival. For some, watching this type of behavior is uncomfortable and even a little embarrassing.

As stated above, it’s good to have an opinion about the festival. But to go out of one’s way to encourage a majority of the public to shun the festival on several levels (and usually for personal reasons) is so unhip.

So here are a few reasons why the naysayers should lay off Kanrocksas:

You may have noticed the graphic I use as the banner for iheartlocalmusic.com. It’s Wayne Coyne (of the Flaming Lips) inside his signature bubble, dancing on top of the crowd. I took that photo at the final Wakarusa ever to take place in Kansas. While I understand why they had to leave, I still miss the festival.

With Wakarusa, I probably didn’t care for 80% of the lineup, but the rest of the bands were still enough of a draw to bring me out. And guess what? I had fun. The festival was laid back, merry and it was right in my back yard. It took me no more than 15 minutes to get there from my house.

The folks at Wakarusa were polite like crazy, and I’m running into that same attitude with Kanrocksas. The festival is going out of their way to communicate with the public, constantly keeping them informed and letting them know how to get to the festival. Thanks to their constant flow of communication through Twitter and Facebook, some have even found themselves winning tickets for free. I’ve never seen so many ticket giveaways leading up to a festival.

So it may not be RIGHT in my backyard this time around, but it’s better than nothing. The dry spell that ran from 2009 until now left a little hole in my heart. I’m thrilled to get a festival (no matter the lineup) back in our neck of the woods.

The lineup for Kanrocksas feels like all of the hippest bands I’ve seen on SNL in the past couple of years. Not every band is a winner, but there’s just enough diversity to garner a decent amount of attention. You’ve got your general festival must-haves (Flaming Lips, Muse, STS9), some budding artists who are skyrocketing to fame (Ellie Goulding, Tinie Tempah), indie favorites (The Joy Formidable), and then what I’ve heard some call “angry white boy music” (Eminem, A Perfect Circle).

I must admit, I don’t even know what to make of a show where I can watch Best Coast, and then turn around and see Primus on one stage and The Black Keys on the other. But (in my opinion) it’s better to make sure EVERYONE’S tastes are included, instead of catering to just one group. This will surely be one of the most diverse crowds I will ever see at a festival.

This has been one of the most highly-debated parts of the festival, and is often the the topic that sets tempers on fire. 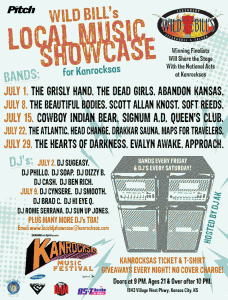 To get you caught up, the festival is holding a showcase over several weekends. Every Friday from now until the festival, local bands will play at Wild Bill’s steakhouse, where they will receive votes from audiences and judges. It’s like a battle of the bands, except the bands are actually getting paid to play. At the end of the competition, one winning band will be selected to share one of the main stages with the national acts. The 2nd, 3rd, 4th and 5th place winners will play a stage on the campgrounds.

Here’s my take on this: festivals don’t have to give a damn about local bands. They can throw a huge event without any local band involvement, and still come out just fine. But because a local group of promoters is involved with this festival, they went out of their way to include local music in the event.

They have good reason for this effort. A lot of the folks behind the festival work with other local promoters. That means they help throw many of the local shows you and I go to every weekend. They are well immersed in the scene, and know that in Lawrence and Kansas City, we have an outstanding music scene that should not go unnoticed when the big party comes to town. I’m sure they had to do a lot of talking and twist a lot of arms to convince the bigwigs behind the festival to include local bands, and for that we should be thankful.

I’ve heard a lot of complaints about the price of tickets for the festival. That’s ok. Festivals can get pricey sometimes. But they’re festivals. At Kanrocksas, $179 gets you a two-day pass, and single day tickets range from $99 to $120 (day of).

It’s safe to say that if you were to see any of the bands on the lineup at a venue, you would pay anywhere from $25 to $120. And that’s all depending on where you sit. You could probably afford a $25 ticket, but it may leave you in the nose-bleed section. I know that at some stops on Muse’s tour this year, fans will end up paying $124.

At Kanrocksas, if you shell out the $179 for the two-day pass, you’re getting nearly 30 big-name acts. If you do the math, that’s just under $7 a band.

And that’s all you’ll pay to be at the festival, because camping and parking is free.

So yes, festival tickets are pricey. But (at the risk of sounding like a salesman) even when you pay the full amount, you’re getting one hell of a deal.

Chill out and have some fun. If you hate the festival and everything about it, then don’t go around ruining everyone else’s good time, Debbie Downer. I love watching music fans get genuinely excited for a major music event (even if it’s sporting a bizarre name). None of us know how it’s going to go, but after the absence of Wakarusa, it’s nice to have a festival to look forward to in Northeast Kansas once again.