On Friday night Kanrocksas held the first of several local music showcases they have scheduled. Every Friday night, local bands will compete for a chance to play the festival. I decided to check out some locals I wasn’t too familiar with before starting my holiday weekend.

The first thing I recognized about The Grisly Hand was Mike Tuley, of Ad Astra Arkestra fame. I’m used to seeing him kill it on the guitar, but tonight, Tuley was on the banjo.

The thing I loved most about The Grisly Hand was their lead singer. She was oozing confidence all over the place, had a smooth and perky singing voice and was definitely there to have fun. Other members of the band harmonized with her on some of their songs, which had a nice bluegrass feel.

I loved the fiddler, it totally added that extra perkiness to the six-piece band. Their performance was definitely a hoedown, and got even the quietest of the audience to tap their toes. I even heard a cowbell at one point.

I really liked The Grisly Hand, and hope they’ll extend their performances across Kansas. It would be nice (and fitting) to see them at Winfield.

The Dead Girls have a reputation of being loud. This is a real rock band. Nearly everyone head bangs during the show, specially their excitable and floppy-haired drummer. He head banged so hard I’m surprised his neck didn’t snap.

Their performance definitely lights a fire under your butt. Because of the strange venue for the showcase, it didn’t get too crowded at any one time. But The Dead Girls definitely drew the biggest crowd.

If you miss rocking out and head banging at shows, then this would be the band for you. They play hard, and they come to rock. So you better come prepared to party hard, because sometimes it’s exhausting just watching them play. 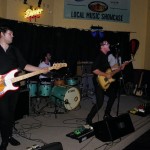 The best surprise of the night came from Abandon Kansas. I fell in love from the very first note. I had no idea who they were, or where they came from, but was an immense fan by the end of their set.

The band hails from Wichita, but I’m glad they made the journey up to Kansas City for the showcase. I was completely impressed by beautiful singing on top of carefully constructed songs. The lead singer was very expressive when he performed, and the band’s sound reminded me of Muse.

Normally when I get introduced to a band I like, I selfishly think “Please move to Lawrence.” But these guys are so great, I want them to stay in Wichita and nourish the scene there. As a spectator from afar, I’ve been noticing that the city has really been getting it’s act together as far as the music scene goes.

These guys are wonderful, and I wouldn’t be surprised if they go places. They already tour nonstop during the year, if only they’d come to Lawrence more often. I was skeptical about this Central Kansas band, but now I’m a fan. I would see these guys again. A million more times. Everybody should.