It’s safe to say if you were at the Granada on Thursday night, you probably had your dancing shoes on. Each act that took the stage that night did something to make your body move, and it was fantastic. 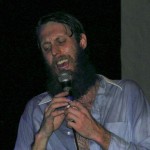 Hush Hush is simply a man who sings over a machine. But he is such an engaging performer that, even just as the opening act, he had the crowd eating out of the palm of his hand.

Donning nothing more than a suit coat, shorts and a tangly beard, his songs ranged from ballad-esque to highly dancey and energetic. I often spotted folks in the crowd dancing and applauding his hard-to-reach notes.

By the end of his set, he was bouncing around in a red cape and some sort of giant ass gold necklace. Then, through one of his songs, he promised to have sex with everybody. This man knows how to strike up a good time! 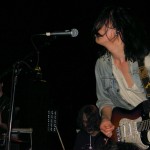 I get the feeling Smith Westerns don’t know just how great they area. They set up and tore down their own gear, and looked just a little bit skittish. It almost felt like watching your little brother’s band, except these guys are actually amazing and write the most wonderful music.

The young rockers are so damn adorable and doe-eyed. They write irresistible choruses over wailing guitars, and they kept it slow, smooth and sultry. This is such a gorgeous band. The lead singer constantly flipped his long and luscious hair out of his eyes. The band said this was their first time in Lawrence. Well then, Smith Westerns, maybe you should come more often, because they absolutely love you here. 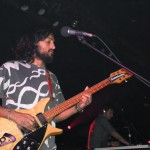 By the time Smith Westerns finished their set, the crowd was enormous and extremely buzzed. I should also note that everyone looked quite fantastic. They were so damn cute, and they all looked like they had just left the salon with a fabulous and hip new haircut.

Yeasayer immediately started in with a beautiful little ballad that had a Middle Eastern feel to it (as do most of their songs). Red lights lit up the stage (that happened to be decorated with fake plants all over), and the crowd went wild.

I was nestled within all the kids (they all had X’s on their hands) at the very front of the stage. I planned on taking some photos just during the first song and heading out, but I was so stimulated with the band’s performance that I ended up staying there for several songs.

The crowd was fabulous. When I left my spot, I had to dig my way out of scores of dancing concert-goers. I don’t think there was a single still body in the house. Even if you didn’t feel like dancing, you at least swayed to the music. Just a bit.

Editor’s note: I wish I could have gotten you some better video, but security didn’t take too kindly to my camera. This is a clip of Madder Red, and it only got harder, faster and dancier from here on out.


Valerie Skubal took some photos of the show, you can find them in a gallery here.

Not enough irons in the fire: mighty musician Taylor Holenbeck up to his ears in the Lawrence scene