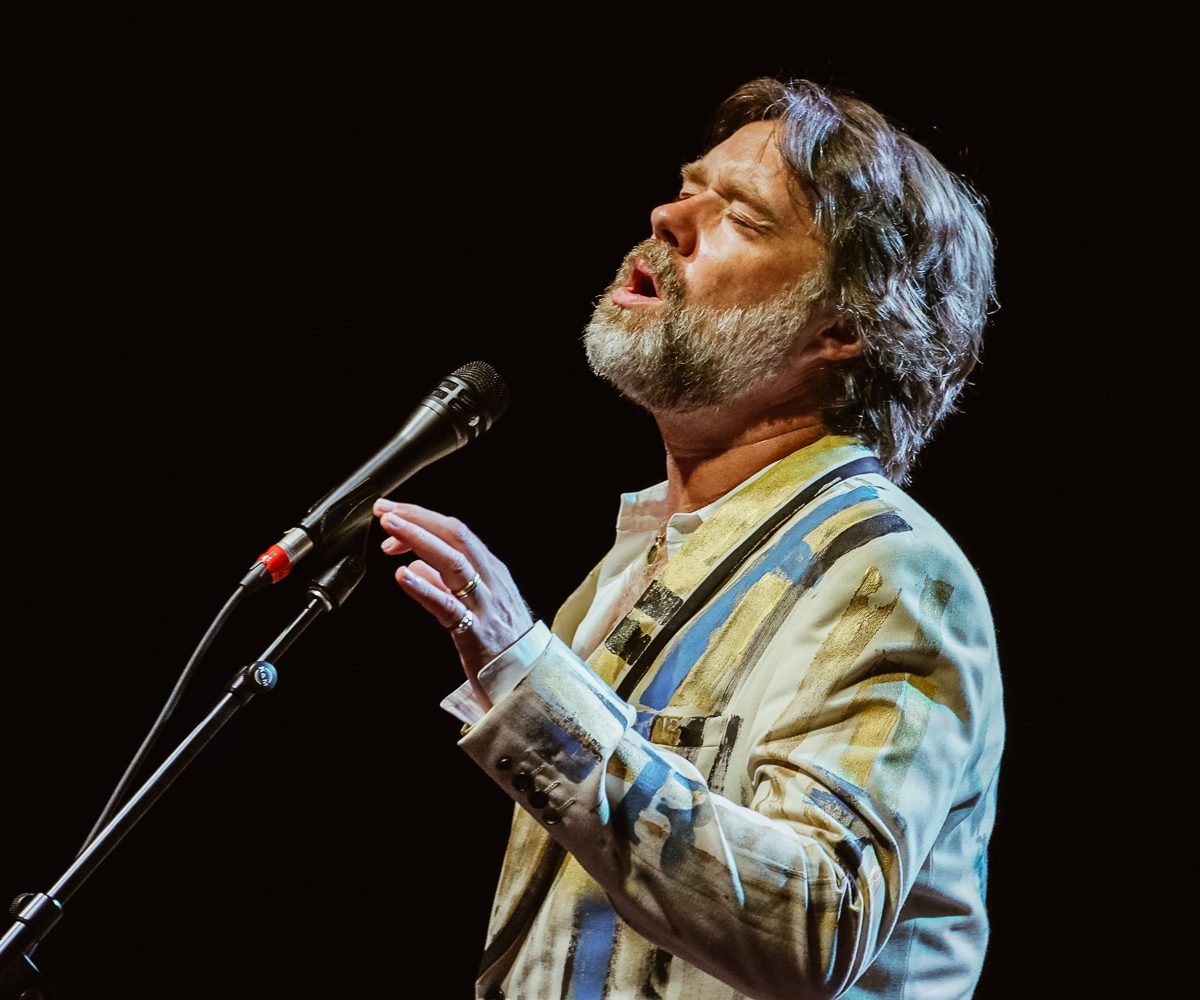 Now, as we start venturing into seeing more touring acts this Fall, that statement is leaving little reminders everywhere. At the Uptown Theater in Kansas City on Monday, you had to show proof of vaccine and remain masked for the duration of the show. There was a hefty crowd, but large gaps remained in seating (possibly for COVID social distancing, possibly because folks just aren’t ready for bigger crowds yet). Events feel pretty different, and we are getting back together rather than getting back to normal. But there are little silver linings to be found. For one, they make COVID-spaced events delightfully intimate.

Such was the case when Rufus Wainwright hit Kansas City. The longtime songwriter was touring in support of his latest album, Unfollow the Rules (named after his daughter one day declared “Sometimes I just want to unfollow the rules!”). The Uptown is a beautiful and massive space, and Wainwright made sure to fill every square inch of it with his vibrato-laced voice.

He definitely got the Kansas memo and donned ruby slippers for the performance. A rousing rendition of “You Ain’t Big” from Unfollow the Rules filled the audience with Kansas pride (even though we were technically in Missouri). It is essentially a critique on the music industry and how artists aren’t considered big until they “make it” in the heartland. But all the Kansas mentions in the vintage-sounding tune got the crowd pretty worked up. “You ain’t big unless you’re big in Alabama. Don’t know who you are unless you made it in Wichita. Gotta get back to Kansas. Except of course back to Lawrence,” he belted as fans whooped and hollered. Most musicians pander with a quick “Go Royals.” Not Wainwright. In Kansas, we get a whole song out of him (and Dorothy’s shoes to match).

Fans got some pretty special moments out of the night, which included a Neil Young (“Harvest”) and Leonard Cohen (“So Long, Marianne”) cover. “Don’t worry, you’ll get your Leonard fix” he teased the audience. One of the highlights of the night was a song he premiered off his upcoming album (set to release this Fall) called “Argentina.” He said “it’s about missing your husband and being in South America,” and then proceeded to break all of our hearts right along with his. “I’ve missed you, I love you, I need you” he crooned at the end. This was met with a collective “awwwww” from the audience.

All of the songs from the set were presented in such a magnificent manner, thanks to the profound arrangements for the quartet ensemble onstage. With just three other musicians joining him, Wainwright and music director (and guitarist) Brian Green crafted new takes on old favorites. Along with Jacob Mann on keys and Alan Hampton on a sometimes very rich upright bass, the four musicians broke our hearts into a million pieces and glued them back together again by the end of the night. Ending on “Hatred” was a bit of a downer (or as Wainwright calls it, an “uptempo darkness”), so they encored with “Alone Time” and a stunning rendition of “Going To A Town.”

It had been 20 years since we last saw a Rufus Wainwright set, and it was well worth the wait. The artist, like all of us, grew a lot during those 20 years… and the last couple of years seemed like time waited for no one. Maintaining a relationship with Wainwright’s music meant fans were rewarded with songs that matured gracefully right alongside us.

He was joined by Swedish songwriter José González who, we kid you not, had fans cheering when he was only tuning his guitar. It takes a lot for a solo musician on a guitar to command the attention of an entire room, and this came easy to González thanks to his mesmerizing guitar work and earthy vocals. His Nick Drake-quality songs were easy to fall for, and the appropriately moody light show helped keep emotions strong. This was his first show of the tour with Wainwright, but he would definitely hold his own on a headlining tour in these parts.

Photo Gallery: Elton Dan and the Rocketband at The Bottleneck

Photo Gallery: Fred Wickham Caravan / The Roseline at the Replay