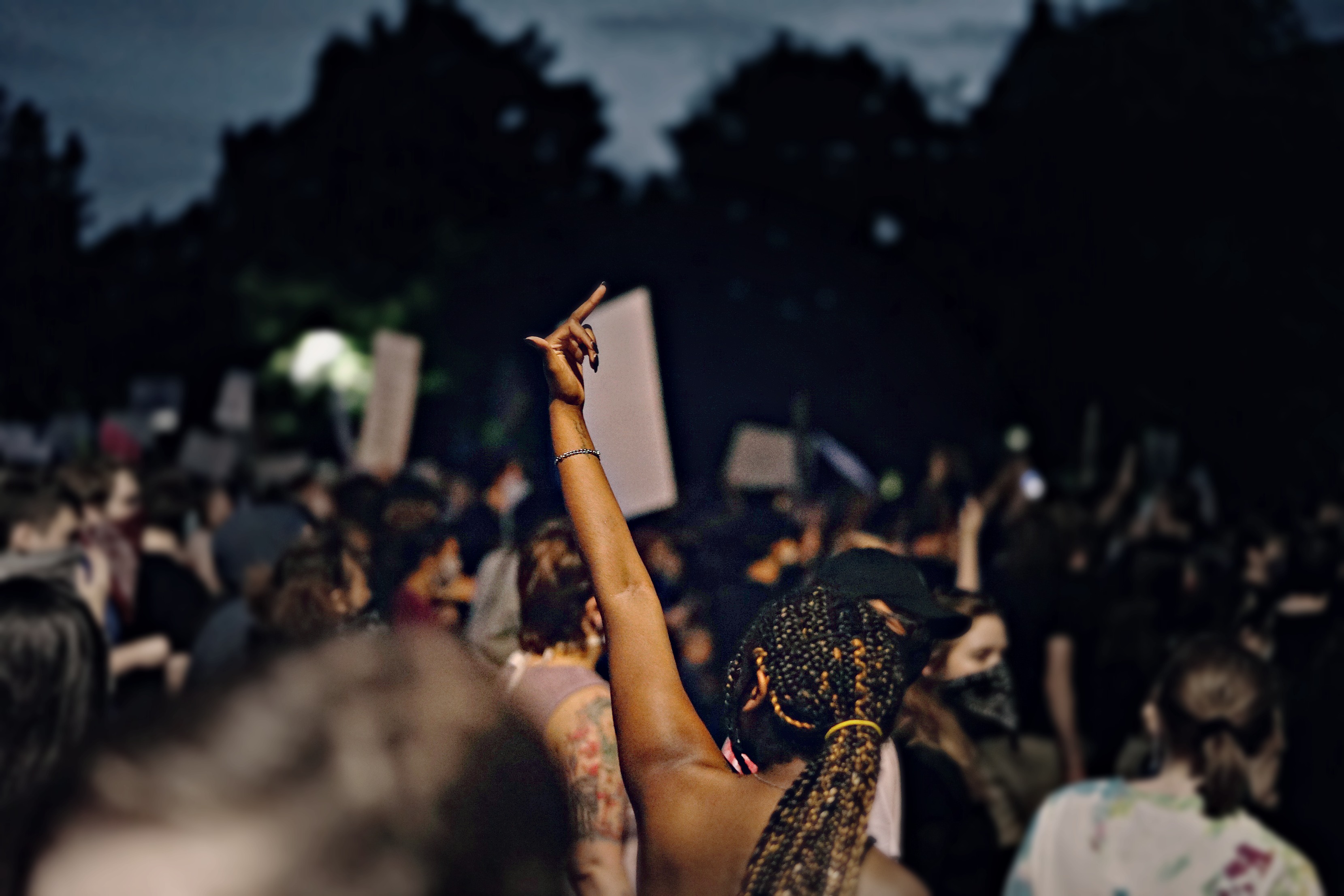 Editor’s note: For safety, we will not be posting any photos of protestors’ faces in our story.

On Sunday night, thousands of Lawrencians descended onto Downtown Lawrence to demand justice and speak out against police brutality. It joins protests across the country after the police murder of George Floyd. The peaceful protest was one of the largest gatherings I had ever seen Downtown, and one promoter I ran into eyeballed it at over 2,000 attendees.

I watched musicians, bookers, promoters, bouncers, bartenders, artists, photographers, lawyers, business owners, and more march in solidarity from one end of Mass St. to the other. There were many trucks that came to intimidate throughout the night, and at one point two cars drove through protestors within moments of each other. As far as we know, there were no major injuries reported. But the protestors remained in solidarity with each other, marching up and down the street, gathering at South Park and the Courthouse, and even taking a knee (and remaining silent for one minute) at the intersection of 9th and Mass. Four months ago, that’s where Chiefs fans were celebrating the Super Bowl, stripping trees of their branches, and destroying some storefronts. But on Sunday night, the moment of silence was so quiet you could hear a pin drop.

This is a music website, and this protest is part of a wave of protests taking over the nation after Floyd (a musician) was murdered. It was the straw that broke the camel’s back after years of police brutally murdering POC across the nation with little to no repercussion. I was there that night to stand in solidarity with POC and provide whatever service I could as a citizen of Lawrence. As a music journalist, though, the night was surreal. After months of missing them during the quarantine, I saw so, so many musicians out in the streets, fighting for justice and human rights (because it’s fucking punk, dammit).

In my pre-quarantine life, I was watching a certain band (that will remain unnamed) rock the stages in Lawrence. On Sunday, I was watching members of that same band using their bodies, trying to defend protestors against a moving vehicle. This is how I watch musicians now. Music is on the back burner.

Much of the protest happened within a block from the Watkins Museum. If you’ve ever been inside, you’ll find endless displays and installations showing years and years of protesting and fighting for human rights (with a focus on rights for POC). It’s in this town’s blood. Maybe someday, images from Sunday night’s protests against police brutality will hang in the Watkins as well. But for now, we’ve got work to do. The time to listen to POC, hear their voices, step up, and be an ally is NOW. You can start by following Black Lives Matter – LFK.