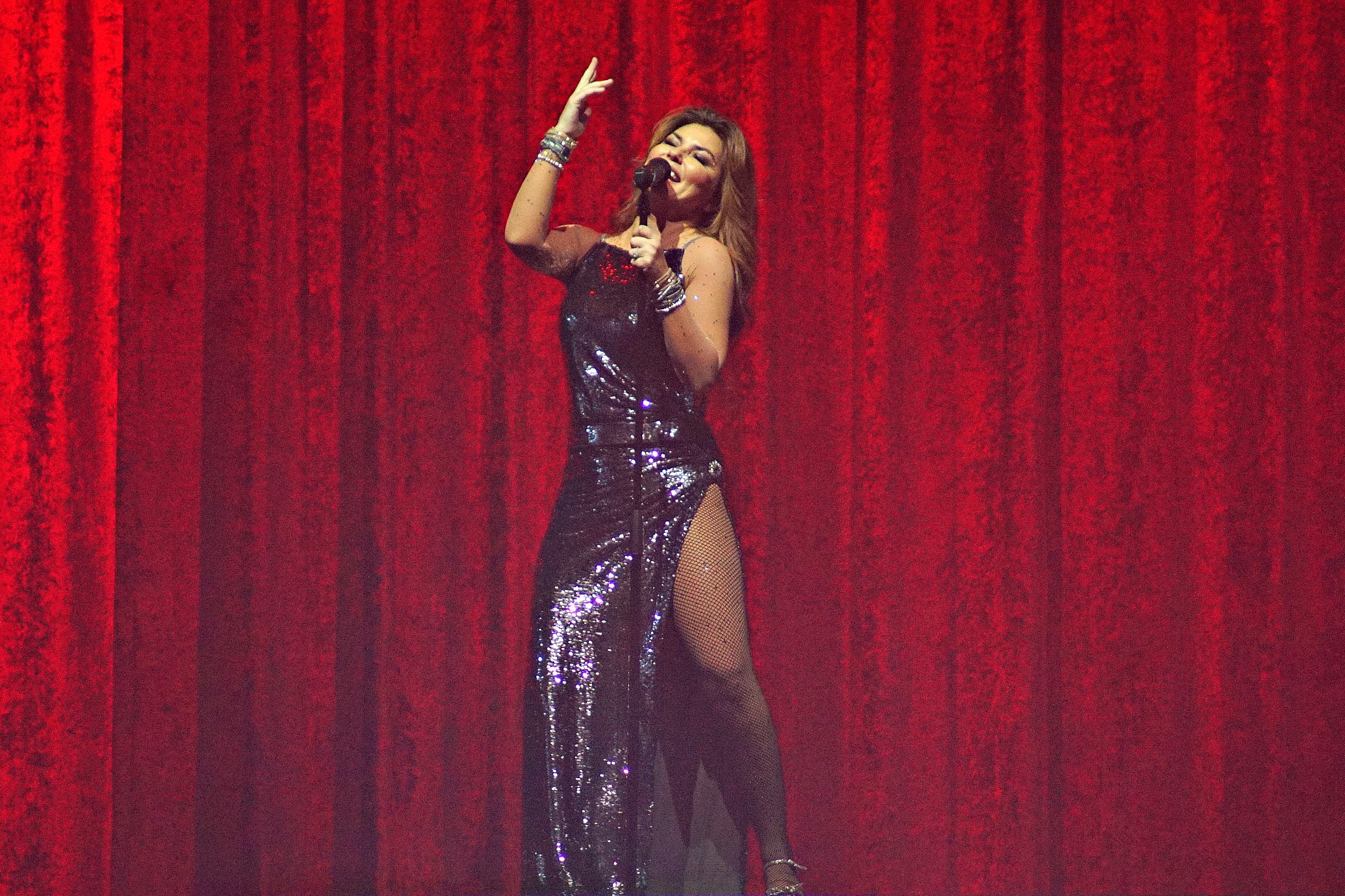 You can’t say that Shania Twain doesn’t love her fans.

Anyone familiar with her shows know she covers a lot of square footage in the two hour-span of her set. Tuesday night’s sold-out show at the Sprint Center was no different. The country pop star made her grand entrance (as usual) from the back, appearing in a sparkling gown and sequined cowboy hat, shaking hands with her fans as she slowly made her way to the stage while her captivating drummer Elijah Wood stood on a podium and provided spritely beats for her to march to before launching into “Life’s About To Get Good.” She would also later position herself in the audience for different songs, as well as for the ever-popular Kiss Cam. And, just to make sure she got close to the folks in the top, she rode a throne made out of a guitar case that lifted her high up in the air and circled the entire Sprint Center.

From the beginning, the hits (and signature leopard print references) kept coming as Shania rolled through many of her fan favorites, including “That Don’t Impress Me Much,” “Any Man of Mine,” “You’re Still the One,” “From This Moment On,” and popular gay anthem “Man, I Feel Like a Woman” in the encore. The show was arguably for the sassy, strong women (and gay men), and the husbands they dragged along so they could get drunk with their gal pals. In fact, many of her songs are about a woman taking charge in a relationship (More notably, “Honey, I’m Home”). Her fans, like her career, bordered pop and country backgrounds (think of a cowboy hat, but a sparkly one).

But Shania is also an incredibly beacon in the queer community. When she only heard femme voices singing along to “Man, I Feel Like a Woman,” she paused to allow the men to chime in. Her entire performance was filled with glittery bodysuits and ballgowns, complete with flowing capes that made her look positively majestic. Midway through the event, like the all-knowing queen that she is, she plucked a gay man out of the crowd after he flashed open his shirt to reveal “MAN I FEEL LIKE A WOMAN” scrawled across his chest. He made a point to note that he had driven up from St. Joe with his husband for the show, and told her that they danced to one of her songs at his wedding.

Number 1 @shaniatwain fan is the guy who came up from St Joe with his hubby, painted “MAN I FEEL LIKE A WOMAN” on his chest, and got a photo with her onstage.

Her male backup dancers donned tight-pants, silk shirts, and plenty of sexy moves. Her drummer Elijah Wood (who we mentioned earlier and was honestly half the fun of this show) recently announced that she’s transitioning from male to female. All these ingredients are key to owning her gay icon status– but if you’re from a small town in Kansas (like yours truly) or Missouri, you know how important it is to welcome that population into a space where they’re not always welcome. This attitude is what puts Shania Twain up there with other gay icons, and likely why the camaraderie was high and vibes were positive at this show.