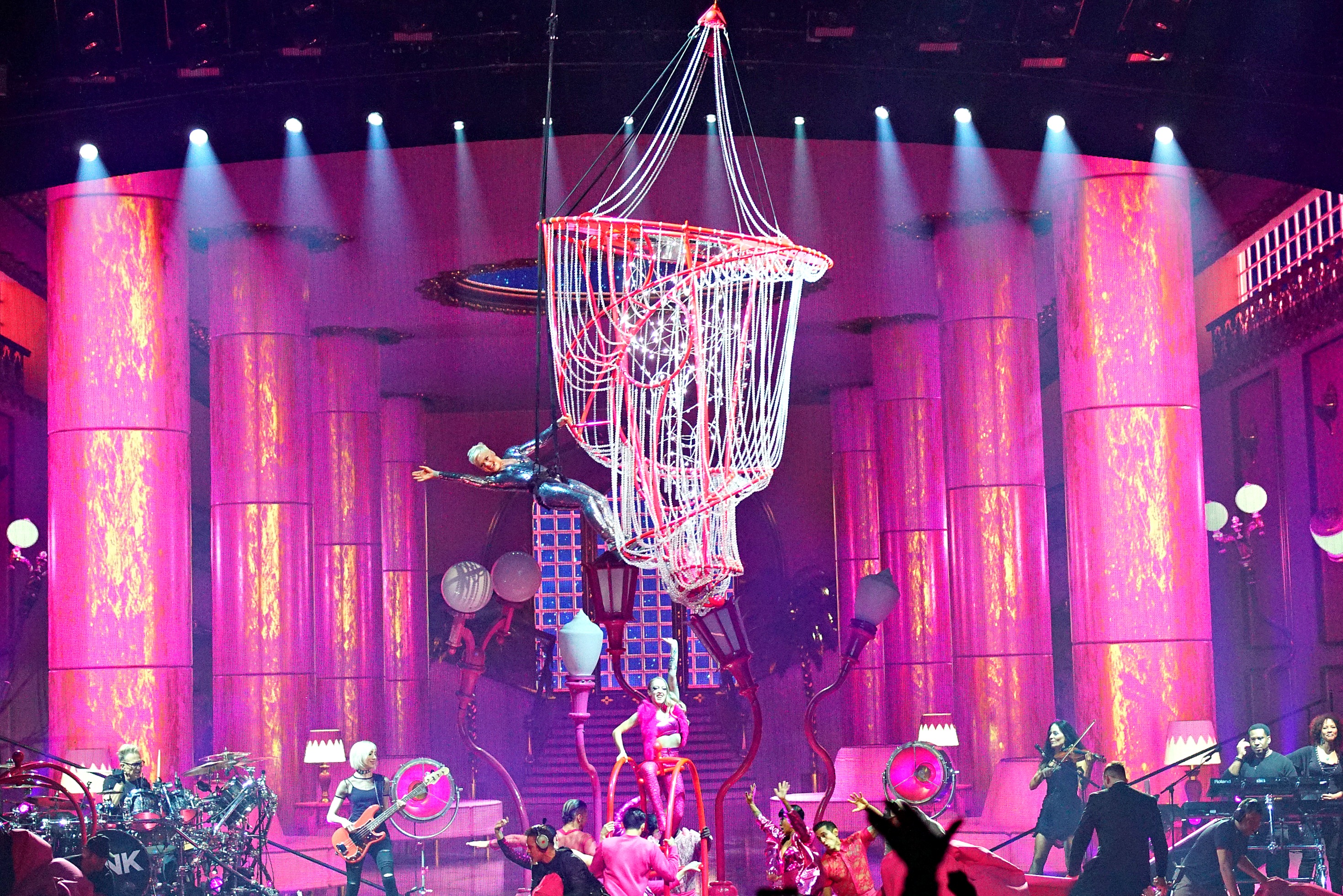 Normally when you go to a high-production pop concert, you expect to see a hefty amount of excitement, props, and dancing. What you don’t expect, though, is a nail-biter of a show. This is where P!NK truly excels.

Thursday night’s concert at the Sprint Center began with gasp-producing stunts right off the bat. A hot pink curtain dropped to reveal P!NK swinging from an enormous chandelier, one as tall as a house, suspended from the very tippy-top of that enormous venue. Descending and swaying in a head-to-toe glam rock speedsuit, she sang “Get the Party Started” while a crew of hot-pink-clad dancers awaited her below. She rarely spent any time on the ground for this number, and this would continue to be a trend throughout the rest of the night.

She continued with her recent single “Beautiful Trauma,” and the namesake for this tour. Watching her hop on and off hot-pink lamp posts while dancing along to the music felt like watching a glitzed out, silver-sequined Fred Astaire.

The rest of the night would prove to be no calmer, as she showcased every trick in the book to keep fans on the edge of their seats for the more than two-hour set. Over the top artistry, costumes, and throbbing muscles were frequent visitors to the stage. Trees rained colorful leaves all over the audience, pyro exploded in the background for “Just Like Fire,” and she took a ride over the audience in a flying four-post bed. This was one of the more particularly distressing moments for the weak at heart, as she hung over the edge without safety harnesses, serenading the crowd. In fact, her bravery and athleticism were in full force all night. You really learn to appreciate artists who don’t lip sync more when they pull out tricks like this. With every flip upsidedown as she was hoisted through the air, you could hear a little more strain in P!NK’s voice (though she hardly ever missed a note).

The dynamic show was peppered in with P!NK’s signature feminist-fueled themes. She played a montage dedicated to the “Me Too” movement (which even included recent footage of Parkland, FL, shooting survivor and activist Emma Gonzalez). “Raise Your Glass” was introduced with a sort of PowerPoint presentation on a recent conversation she had with her daughter regarding appearance. Earlier in the night, the singer known for her glamorous androgynous style (and demeanor) covered No Doubt’s “Just A Girl.” “Thanks Gwen, for writing that song,” she stated when she finished. “I wonder, if when they wrote it, they knew what it would mean for 2018.”

Her words were inspiring, and it felt like they came from a genuine place because she had the songs to back them up. P!NK has been a longtime activist, spending countless days campaigning for same-sex marriage, animal rights, and even victims of brushfires in Australia. So it’s no surprise emotions were running high within the audience. Throw in the high-intensity acrobatics that hung in the air throughout the night, and P!NK provided one of the most gripping and breathtaking pop performances you’re likely to see all year.