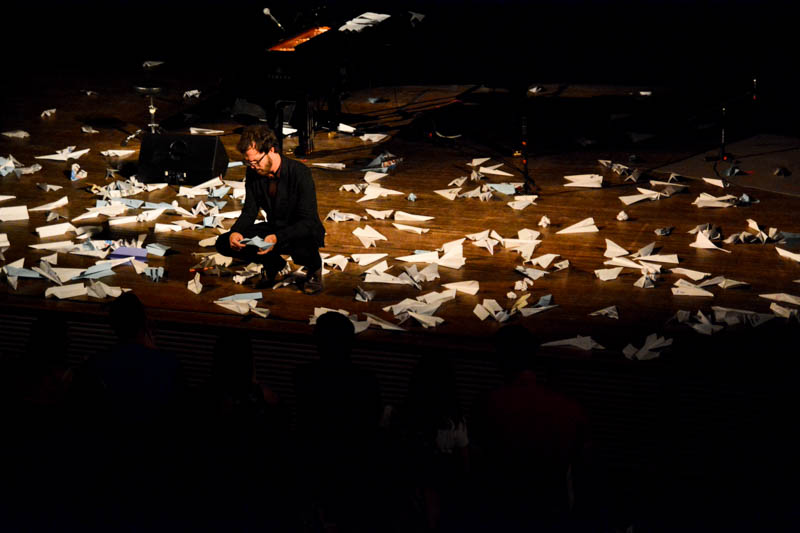 Old friend of Lawrence, Ben Folds, brought a little whimsy and his raw musicianship as a part of the much anticipated Paper Airplanes Tour Sunday evening. Excitement for the concert had certainly built among my friends; they were charmed by the idea of getting to participate and ask for requests without screaming them out. Folds’ tour requires audience participation- each concert goer gets a piece of paper to write their request on and, when the signal is given, they’re invited to rain those airplanes down on the stage around Folds, giving him the songs to build the rest of his set around. He intended to pick at random and only skip songs that had either already been played or were wrong for the tempo of the show (he explained the Rock N’ Roll rule that a concert can never end on three ballads, so that might exclude a request). At one show he even played a medley of the rest of the songs he hadn’t gotten to- so Liberty Hall had high hopes for Sunday night.

Tall Heights, a trio out of Boston, certainly set the whimsical mood with an electronic folk sound that could have been at home at the Kansas State Fiddling and Picking Championships in South Park earlier in the day. Dreamy, indie-folk melodies mingled with falsettos and was heightened when the band asked for their own audience participation; they had the audience call the phone next to them and hold them microphone to microphone. The chirping effect of the feedback momentarily transported everyone to a field in summer filled with the sound of crickets.

After Tall Heights’ set, the stage was cleared off leaving a piano and a monitor. Folds took the stage without a lot of fan fare and set to work. Without a backing band and only a grand piano, Folds filled the theater with his seemingly flawless piano playing and angsty but genuine voice. And for the fans of Ben Folds’ harmonies, not to worry- the audience filled in beautifully, singing their favorites back to him. Folds also provided some training, even conducting the audience while setting them into a four-part harmony, telling them not to let what someone else was singing, “throw off their shit.”

Folds even mentioned a story about a friend he had made in Lawrence– a kid who was pretty funny, did some theater stuff, and once helped him load a grand piano into the Bottleneck for a show he did in LFK back in the 90’s. He said the kid was doing pretty good now, you might have heard of him, Jason Sudeikis? As he chuckled at the audience reaction, Folds pointed out that Sudeikis had been his “piano bitch.” In an interview with Bazaar, Sudeikis also recounted the story and added that later, Folds had been the musical act on Sudeikis’ second episode of SNL. The two have been friends since.

Even with the airplane requests, fans couldn’t resist shouting out a few requests. When one audience member asked for “Rocking The Suburbs,” Folds asked her to “trust the process.” She was not disappointed- no one was. Folds was charming, relaxed and made a sold-out Liberty Hall feel like an intimate night of drinking with friends and singing along to all your favorite songs.