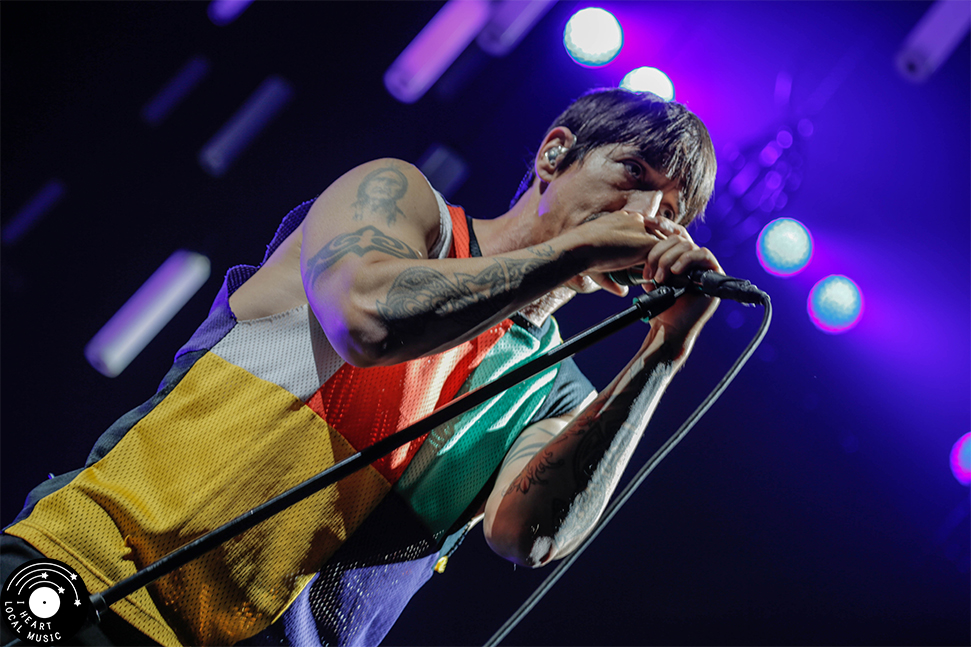 The Red Hot Chili Peppers took the stage Sunday night in Kansas City at the Sprint Center for a 90-or-so-minute set full of jam band moments and pulsing neck veins. Shirts came off, bass was beasted, guitar was shredded, and drums were slayed under what looked like a Lite Brite suspended from the venue’s ceiling. The live visual feed intermixed with preset visuals that projected behind the band really brought the entire production to life to the point where there wasn’t really a bad seat in the house.

Bassist Flea, drummer Chad Smith, and guitarist Josh Klinghoffer kicked the set off with an Intro jam which set the tone of continuous jam moments throughout the night. The band ripped into “Can’t Stop” as Anthony Kiedis made his appearance on stage. The band kept it fresh by playing four tunes off their latest release. After all, they are on The Getaway tour.

The first opener was founding RHCP member Jack Irons, who played drums along to instrumentals. His son, Zach Irons, is the founder and lead guitarist for Irontom, who were the second openers of the night.

Whether or not one was a seasoned fan or just there for the love of live music, the Red Hot Chili Peppers sure delivered on the account of entertainment. The musicianship paired with the onstage athleticism brought together thousands, from fans of the newest album The Getaway to those who’ve been fans since the 80’s. From how they looked to how they sounded and beyond, it makes sense that the Red Hot Chili Peppers have been around for decades. Most people could probably guess how the night ended but I wouldn’t want to “Give it Away.”

Encore:
Goodbye Angels
Give it Away

Words and photos by Khitam Jabr