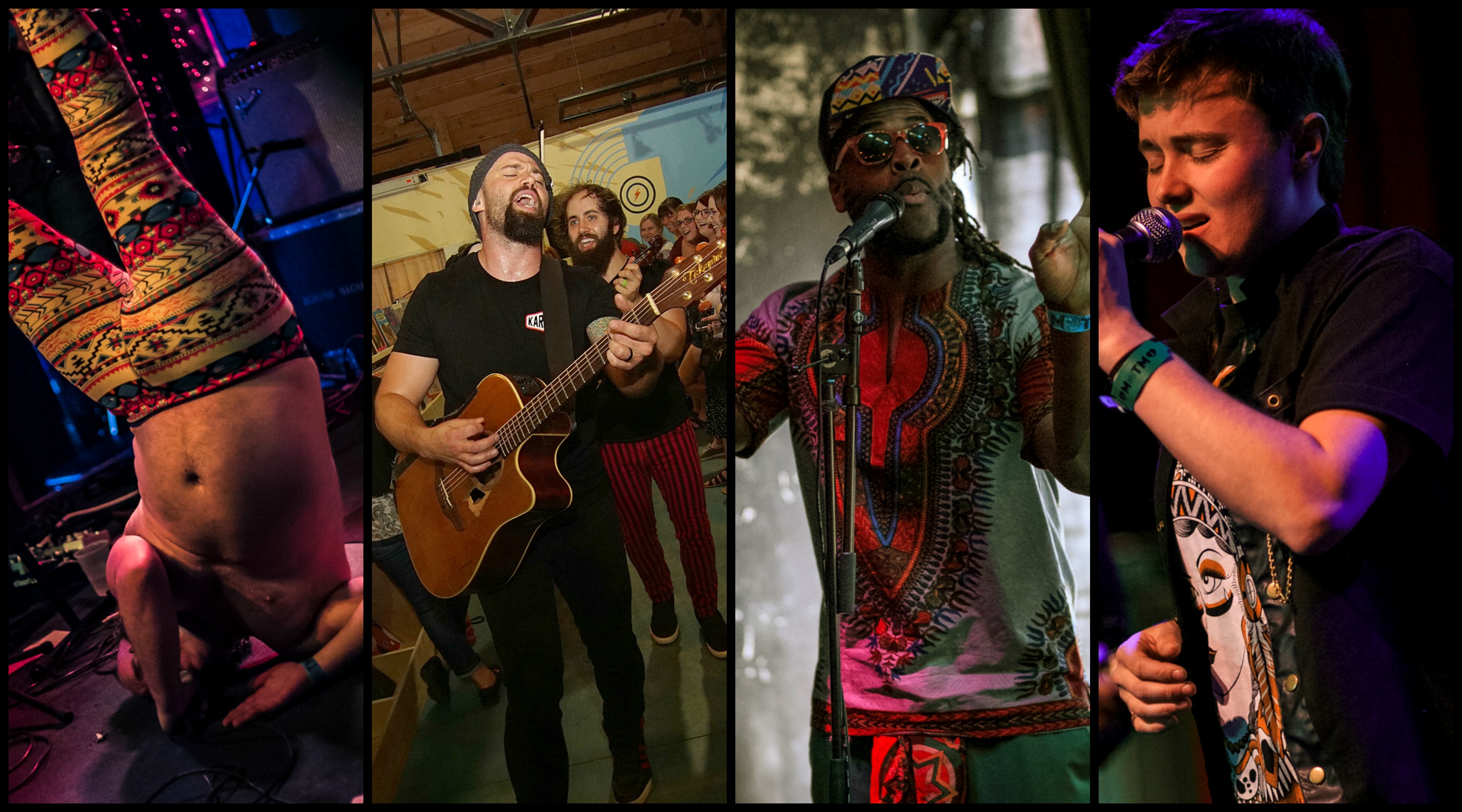 With Middle of the Map Fest now a familiar event in Kansas City, we saw some slight changes this year. The festival, previously concentrated in one area, was now sprawled across Westport, the Crossroads, and a couple of major venues. But what’s impressive is how the emphasis was still kept, enhanced even, on local acts. Record Stores also played a major role, offering accessibility to fans of all ages by keeping their sets free (and lively). The I Heart Local Music staff hit the music fest in full force, and here are the acts that caught our attention the most.

You’ll be hard pressed to find a Kansas City act cooler than Eems. He first caught our attention a couple of years ago at SXSW when he melted genres together over a ukulele. On Friday, he kicked off the festival with an unforgettable performance at Mills Record Company.

Eems makes high-paced, fun pop ballads infused with funk and hip-hop– and he does it all over that little ukulele while his own looped voice and beatboxing provide the beats. He makes ukuleles look cool– and you guys, ukuleles are not cool. His personality is charming as all heck, which is why the audience allows all the in-between song banter. Very few musicians are thinking outside the box these days, but Eems is thinking outside several boxes, stringing them together, and creating something new.

If you’re looking for pure, unapologetic happiness, you’ll find it with Run With It. The Kansas City band hit the performance area inside Josey Records Saturday afternoon with the strength and vitality of a thousand suns. These guys are just little balls of energy, bouncing off of anything they could find.

The performance area at the record store is no bigger than the area rug the bands are set up on. But Run With It ditched that space several times over. They climbed monitors, jumped off, sprinted up and down the aisles, and even started a parade of sorts throughout the store. You couldn’t dare step out for a smoke break or even blink, because you might miss the drum party or fiddle solos. Run With It is all pluck and pomp, with powerhouse vocals to match. Positivity is the name of their game, and it’ll take them far.

I don’t know her personally, but from afar, Erica Joy seems like a sweet and unassuming human being. Maybe a bit of an introvert? I don’t know. First impressions and all. And while nothing of what I said is negative, it only seems to me to fly in the face of her heart-meltingly talented vocals and songwriting. I won’t underestimate this one ever again. She’ll turn you into a puddle of melted butter if you’re not careful. Like a box of valentines chocolates left to sit lonely in the sun on a park bench, you’ll walk out after her set all but an empty box. She’s SO GOOD!

These two deserve to be mentioned together. Even Ebony Tusks frontman Martinez Hillard said it himself, “without Heartfelt Anarchy there would be no Ebony Tusks.”

While both are social justice/politically minded, they approach things in such different ways. They’re like two halves of the same side of a disabused coin. The anger is there for both, but while Ebony Tusks takes a darker, sonically violent path, Heartfelt Anarchy takes the Avantgarde, punk rock, laugh in the face of the bullshit path. This was my first time seeing Heartfelt Anarchy and I loved it from the jump. While I’ve seen Ebony Tusks perform far too many times to count, I have to say that there was something extra this time. I really think this was their best performance yet, and I’m excited to see how they grow from it.

If there could be one, the absolute best performance to end three days of festivities would be that of awkward crooner Har Mar Superstar. Famous for his pipes and his musical talent, and marrying it all to semi-nude performances, Har Mar is the smooth, funky, tongue-in-cheek performance art that absolutely everyone should see far more than once in their lives.

AZP, a six-piece band from Lincoln, Nebraska, lit up the outdoor stage of Riot Room Friday night. Each member of the band radiated energy as they delivered a set that melded rock and soul sprinkled with a skosh of pop and hip hop. The eclectic sound attracted an incredibly diverse crowd that vibed as one throughout the set. AZP left everything on the stage including an massive amount of intrigue among festival goers.