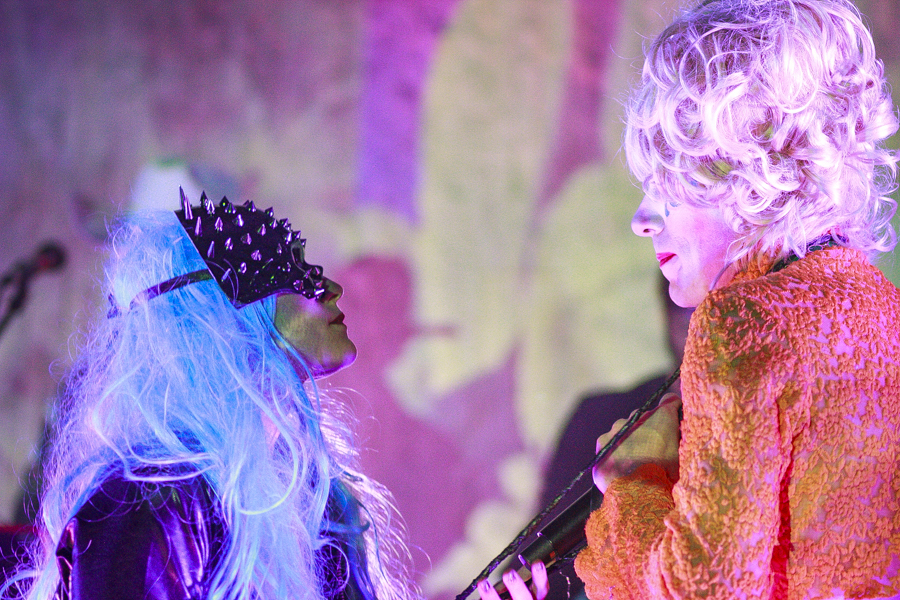 Psychedelic Indie-pop glam-rock funk band Of Montreal pulled no punches Friday night in bringing their wild and colorful stage show to recordBar in Kansas City.  Of Montreal’s stage show is a Lady Gaga dream of costume changes and an ever-rotating cast of strange, costumed characters taking the stage. But this is all par for the course for an Of Montreal Live show.

The music is just too good, and Frontman Kevin Barnes has too much soul for their not to be masked wrestlers wrestling, or skull-faced police dragging a leather clad, whip wielding woman from the stage. His voice – the sound, range, and style of which seems to hover somewhere betwixt Cyndi Lauper, Bowie, and Prince – is just too phenomenal to not be accompanied by visuals of faces melting into other faces, or woman sized, hairless cat-priests praying to visages of another hairless cat projected onto screens held by others on stage. Appearing in full drag, complete with costume changes, why wouldn’t the winged beauties at his sides turn their backs and morph into a giant female reproductive system?  It just seems so obvious that the stage show should attempt to match the level of awesomeness achieved by the music itself.

Playing for a full hour, the band never stopped. Each song rolled into the next perfectly. And the crowd was filled with fans that knew the lyrics, knew when and what to chant… Hell, they even seemed to match Barnes’ hand movements. On more than one occasion I pondered the stability of the dance floor, as the floor itself bounced as though it had been built upon a giant spring. Is there a basement? Would so many people jumping in unison cause me to see first hand? Luckily, through a solid hour of music and a three-song encore, an affirmative answer wasn’t in the cards.