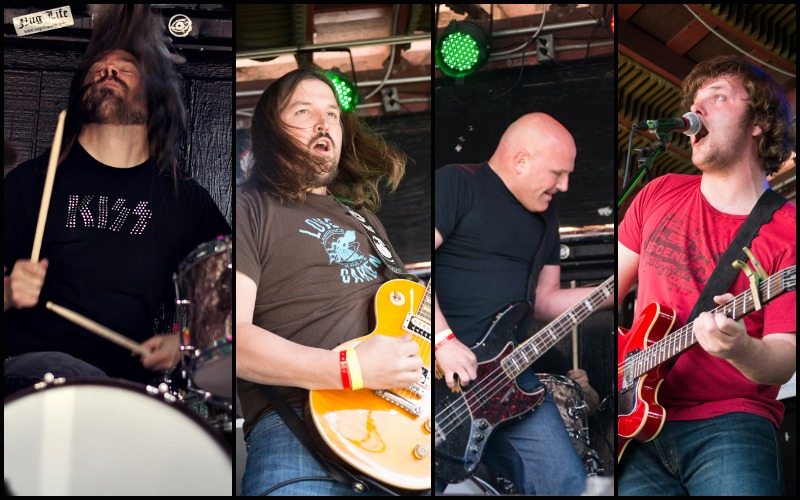 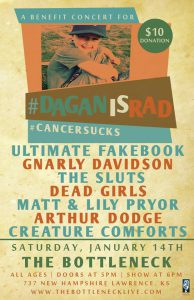 When a longtime music fan is faced with a scary journey, the music community in Lawrence tends to rally around them. That’s why this Saturday, scores of musicians will hit the stage at the Bottleneck to raise money for Dagan Lingenfelter, a six year-old who was diagnosed with Acute Lymphoblastic Leukemia. Ultimate Fakebook, Gnarly Davidson, The Sluts, The Creature Comforts, The Dead Girls, Matt and Lily Pryor, and Arthur Dodge will all be raising money to help with Dagan’s medical expenses to help him beat cancer.

You’ll notice that some of the acts on the bill are bands that have disbanded, but occasionally reunite when they’re needed. Eric Melin, of Ultimate Fakebook and The Dead Girls, says Dagan’s mother Megan Hanna is a longtime friend of these bands. He says the time has come to reciprocate the support they saw from her years ago. “Besides being the sweetest person you’ll ever meet, Megan was an early supporter of the local music scene in the late 90s/2000s and worked hundreds of shows in the Midwest by visiting out-of-town bands,” he says. “She is an integral part of the connective tissue that made the era feel like a true family, and was always there for us.”

Dagan’s a pretty big music fan himself, according to his mother. He’s also a huge Royals fan and loves discussing stats and players with adults. Megan and Dagan only recently learned of the diagnosis, and they’re expecting a lot of missed days of school. “As a result of his diagnosis, I am taking leave from work to care of him and help him with his homebound schooling,” she says, noting he’ll miss his friends during this time. “I can’t begin to fully explain how this has upended our family dynamic as well as structure and emotions.”

Now, one month into Dagan’s diagnosis, the medical bills are adding up. To deal with the expenses that are growing quickly, Melin says The Bottleneck worked quickly to arrange the show. “It hasn’t been hard to get people on board, which is a testament to how much Megan and her family mean to the community,” he admits. Dagan’s mother says she didn’t see it coming. “The fundraiser – It was a total surprise, actually,” says Hanna. “The folks at The Bottleneck in Lawrence, a venue I worked at for years in my twenties, and the bands involved conspired for the ultimate kindness to support our family.” Hanna, who started as a stagehand in the music scene and worked her way up, has always been fond of local music and is overwhelmed with seeing that support thrown back at her. “The locals though have always fueled my love of live music… those people are what shaped my love of music and became my community, my friends and my extended family,” she says. “One of my all-time favorite pastimes is to stand in the front row at a show with some friends and dance. I don’t imagine that changing anytime soon.”

The fundraiser was also a good opportunity to keep Ultimate Fakebook’s band’s members in contact (and in practice). “It seems like these days we just play shows for and around friends’ get-togethers, fundraisers, and random festivals,” he says. “We don’t want to overstay our welcome playing every year or so, but there is no grand plan. I don’t think we thought anything was likely this year, but then this came up— and a show like this really matters.”

You can help raise money for Dagan’s expenses while rocking out with some of the wildest musicians in town this Saturday at the Bottleneck. The show starts at 5:00 p.m., with a suggested $10 donation at the door.

Watch: The Thunderclaps bring warm, surf rock to the Replay