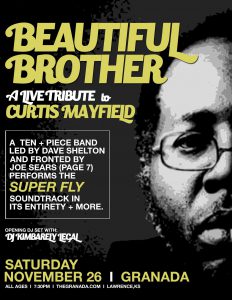 This weekend, the Granada’s about to get Super Fly.

That’s where several musicians are banding together for a Curtis Mayfield tribute. The event, dubbed “Beautiful Brother – A Live Tribute to Curtis Mayfield,” kicks off at 7:30 and features a ten-piece band fronted by Page 7’s Joe Sears and a performance of the entire soundtrack to “Super Fly.” It was Sears who initially put the bug in musician David Shelton’s ear, reaching out after hearing about an Erykah Badu tribute show Shelton organized earlier this year.

Shelton, a seasoned Lawrence musician, made sure all the right players were in place for the tribute. “Joe and I met early on and gathered a list of players who we wanted to be involved based on their musical sensibilities and commitment to accuracy,” he says. “For something like this, you need people with strong R&B chops who are well versed in the genre and who are willing to dig deep into the music.” Shelton says he enlisted Tommy Johnson Jr. to write the horn and synth string arrangements for the band. He’s hoping the right lineup will do Curtis Mayfield’s music justice.

He’s hoping fans walk away from the show with not only a new understanding of his work, but finding beauty in painful experiences. “The reality is that so much of the evil side of American life that Curtis talked about 40 odd years ago is still very much alive today, and that his words on that topic are still so relevant,” he says. “The more you dig into his lyrics, you find that he was wrestling on a deep and profound level with how to find hope, joy, and humanity in the midst of all that. In a lot of ways, it seems like Curtis saw the future of what could happen in America… and I think that his lyrics and music address the anguish of that reality and somehow still find hope on a level that few ever have.”

You can see the tribute this Saturday at the Granada with the ten-piece band and an opening set by DJ Kimbarely Legal. 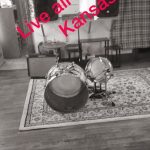