LFK gets weird at SXSW with I Heart Local Music

LFK gets weird at SXSW with I Heart Local Music 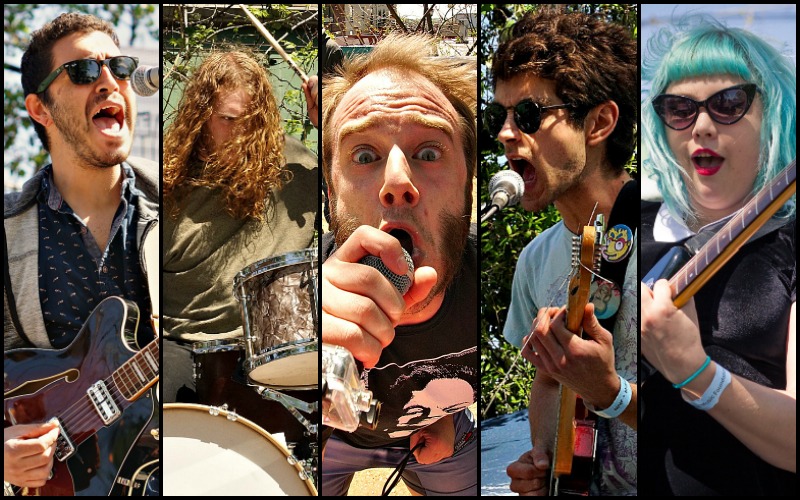 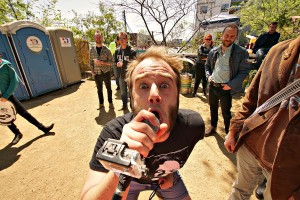 Well, shit got weird at SXSW.

This was expected, considering the Lawrence bands that descended upon the festival. Some of those bands congregated at the I Heart Local Music showcase at SXSW Saturday as part of Midcoast Takeover, a week-long event that benefits Midwest Music Foundation. 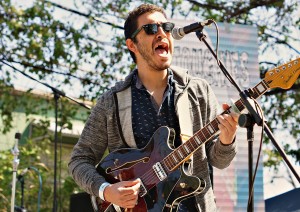 The show started early by rocker standards, with Toughies taking the stage right at noon. The band’s bassist referred to themselves as “the musical equivalent of a bloody mary,” which is perfect if you think about it. They were the first dose of music in the alcohol-fueled festival, but easy to swallow at that hour thanks to a smooth and lovable sound that goes down easy (Toughies! It’s what’s for breakfast!). When Toughies took the stage, everyone mulling about seemed to let out a collective sigh of relief and unwind with Lawrence’s mellowest band. 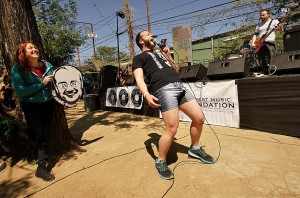 First off, the band just acquired a “new” van. Randy the Dog Van is modeled after the van in dumb and dumber. They were spotted on the highway and fawned over by other bands. When they did take the stage, they went full LFK on everyone’s ass… beginning with frontman Travis Arey’s continued war on pants. The eccentric singer donned a clever anti-Brownback t-shirt, along with a skin-tight pair of bike shorts with male genitalia printed on them. As he’s done in the past, he went as far as his mic chord would take him— in this case it was past the outdoor stage area, through the patio, and into the bar, where many stunned day drinkers were startled by his band-less vocals. 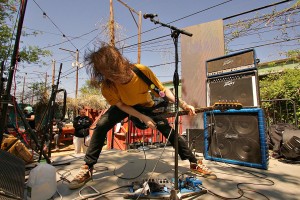 Bummer reluctantly took a break from eating Whataburger to play showcases at SXSW. This was actually their second show of the week at Midcoast Takeover and had become Kansas City favorites by Saturday. Bummer is the type of band that, when they play, metalheads seem to just manifest. Halfway through their first rager, long-haired, tattooed, and bearded folk started emerging out of the woodwork. After about a minute of standing stoically, they bobbed their heads along in agreement. Bummer delivered all the whiplash-inducing head banging they could without causing damage to their brains, although we can’t say the same about the damage happily sustained by our eardrums. 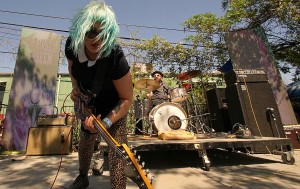 You could come up with every word possible to describe a badass guitarist (shreds, thrashes, wails), and it still wouldn’t be enough to describe the rock force that is Bruiser Queen. Morgan Nusbaum has solidified herself as the queen of rock, and we all bowed down on Saturday. Nusbaum is so solid in her performance that the band will never need a third member. She holds it down with all the guitar riffs and solos the human minds can handle, seasoned with vocals that slay. When they hit the stage at SXSW on Saturday, people wandered in off the street based on those ever-so-strong vocals that carried down two city blocks. 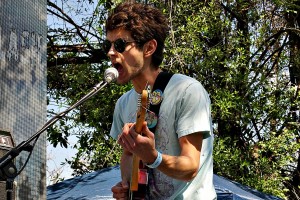 One of the hosts of this event watched Arc Flash for the first time, then called them “fucking mad scientists.” This is likely because of the manner of methods the two-piece used to create mountains of noise. They brought all their garage-heavy songs with reverb-rich vocals that bounced off of every body in the venue, but also tried out a couple of new tricks. James Thomblison got experimental, yelling into his guitar for added vocal effects and also tinkering around with a dollar-store keyboard. The audience at this event were mostly witnessing Arc Flash for the first time, but behaved like a Lawrence audience because by the end of the set had gathered as close as they could to the band, despite the separation of a large stage. We’re not sure what sort of experiments these scientists are conducting, but it’s a strange science that conjures up the same results no matter where they play.

Watch: Your Friend at SXSW