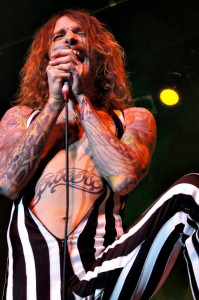 “We are The Darkness from the UK, and we are here on fucking BUSINESS!” Justin Hawkins, the frontman for the ruckus-inducing epic rock band couldn’t have belted out truer words. The band arrived on the Uptown Stage in Kansas City in all their 80’s rock glory (but keep in mind, this is a band that started in 2000).

The band threw down good and hard, harmonizing with opera-range vocals, fierce shredding, throwing sticks into the air, and even curing our fevers with a little cowbell. Hawkins, more agile than a cheerleader, thrilled the audience with spandex-laced stunts, including splits, high kicks, and leading the audience in a clap along with his feet while standing on his head (there’s video of this jaw-dropping stunt below, the madness starts at 2:05 in). It was exhausting just to watch him.

No doubt every audience member’s hands were sore from all the clapping that came rushing out of them. On what has to be one of the coldest days of the year so far, scores came out to witness the glam rock and acrobatics. They were heavily rewarded with what will surely be one of the best live shows of the year. Turns out The Darkness did indeed give us “the business.”

Hell Or High Water, out of Southern California, opened the night with a spunky rock set that had them leading the crowd in a series of “Woo!”s and “Hey-yeah!”s