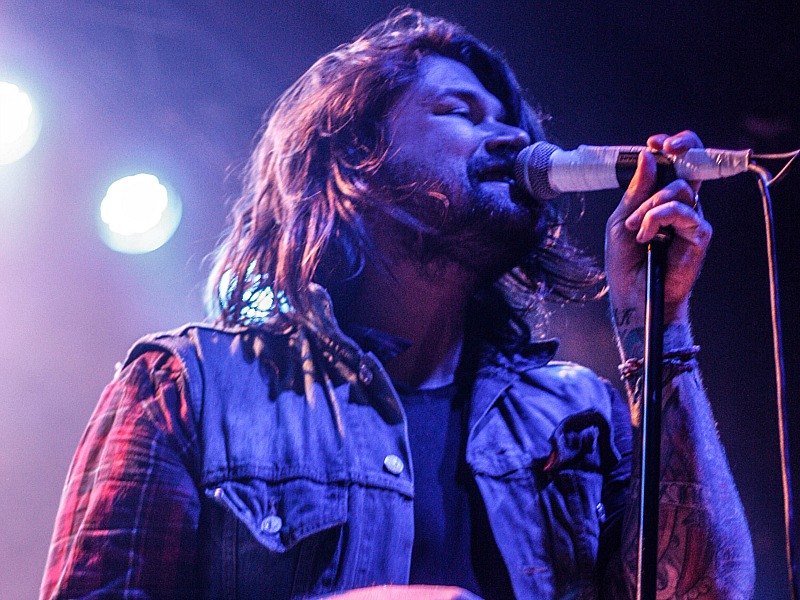 Taking Back Sunday’s Tell All Your Friends was beloved by a generation of kids in the early aughts. So the group decided to pay back their fans by playing the album top to bottom on this, the ten year anniversary tour of the album. To those that thought emo was dead: know that it was alive and thriving in Lawrence at the Granada on Saturday night. For this community the show held extra meaning as it brought back a couple of much-missed townies.

Right on time Mansions, out of Seattle, took the stage. Halfway through the set they introduced their drummer, John Momberg, a Lawrence native, to a roar of applause.  Momberg, previously drummer for local band The Appleseed Cast, dipped his head in humble appreciation of the adoration. Lead singer Christopher Brower assured everyone that, other than Seattle, there’s nowhere they’d rather live than Lawrence. This was met with hearty approval from the crowd. He pointed out that Momberg had at one time worked at the Granada. Though this was a national tour, it almost felt like being at the Replay on a Tuesday night.  Mansions’ grungy emo rock eased the audience into an evening that would end in thrashing. They even gave the crowd a taste of what was to come by inviting John Nolan of TBS out to join them on “Two Suits (80 Fuckin Dollars).”

Bayside, out of Long Island, New York (an area that has put out an impressive amount of emo/screamo groups including Taking Back Sunday) came on next to a crowd that was about ready to burst. Their classic punk sound translated beautifully to the stage in an energetic and sincere set. Frontman Anthony Reneri’s clear, deep voice cuts perfectly through their impressive guitar runs, all coming together with well-timed key changes and choruses that lend themselves to being repeated back by the crowd.

Taking Back Sunday took the stage to strains of “Won’t You Be My Neighbor,” immediately striking a nostalgic note with all the 80’s babies.  Their first set was made up of tracks from their more recent albums, and lead man Adam Lazzara delivered his signature mic swinging moves. Their emotive post-punk sound was on fine display, with the crowd practically covering the vocals. After playing a handful of newer tracks the guys took a short break before starting into Tell All Your Friends. Taking Back Sunday’s sound is rounded out with answering vocals from local-guy-by-marriage John Nolan. Nolan, who met his wife in Kansas, lived in here for 4 years while he was pursuing other musical projects. He professed to have loved living in Lawrence and has stated in interviews that he sees himself and his family (he’s father to a brand new baby with his wife Camille) settling here again someday.

The group finished out the album with Lazzara actually moving through the crowd, albeit slowly, and holding the mic out for revelers to sing along.  Rather than do an encore they played two previously unreleased (but no well-less known) tracks from the same era as Tell All Your Friends.

Watch: The Late Night Callers at the Bottleneck