I Heart Local Music on the road: Rat City Ruckus 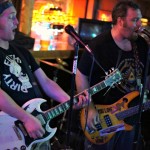 I Heart Local Music is on the road this week, checking out the local music scene in Seattle. We temporarily left Oz for the Emerald City, and on our first night we found ourselves watching local punk rockers Rat City Ruckus’ tour kickoff at the Alki Tavern, a friendly bar where aging punk rockers go to live out their final days.

Despite a cozy space, the bar sectioned off a reasonably sized area for a stage right near the entrance, leaving plenty of room to thrash. The fans, although authentically smiley and polite, had a secret tough streak, and enjoyed good natured scuffling in front of the stage. 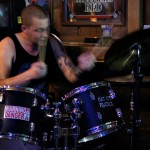 We were most impressed with the Rat City Ruckus drummer, who sported two meaty arms with little drumstick twigs sticking out just enough to wreak havoc on the kit. His five-minute drum solo nearly floored us. That, combined with the band’s fast-paced and driving beats, reminded us of another punk rock trio back home. We could definitely see Rat City Ruckus touring with the likes of Lawrence’s very own Radkey. 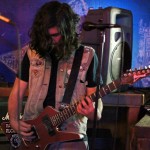 The citizens of the area known as Rat City in Seattle are a proud and rowdy bunch. When they weren’t throwing down at the heels of the band, they were pumping their fists in the air on cue when the mischievous musicians belted out the words “Rat City Go!” The most dedicated fans sometimes threw beer cans at the band, which is how concert-goers show their approval here.

The two doors at the entrance of the venue remained propped open throughout the night, allowing the scent of the waterfront by the bar to waft through. But nothing smells better than hometown pride, which bleeds through most citizens of Rat City and the dedicated group of fans attached to Rat City Ruckus.