Watch: Monsoon Lazer at the Replay 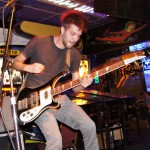 Monsoon Lazer at the Replay

You could call it the perfect recipe for post rock. A new band has formed in Lawrence, and it features equal parts screaming, convulsing, and impeccable musicianship. 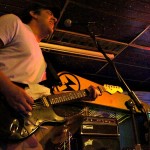 Monsoon Lazer at the Replay

Monsoon Lazer is comprised of the Gunnerson brothers (of JabberJosh) and Aaron Pillar (of Appleseed Cast). The performance features the Gunnersons offering a little more restraint and precision than what we’re used to seeing from the duo, although there is plenty of floppy Sam to be found onstage and we still get to watch Will close his eyes in utter concentration (which is a real treat when you get to see the flawless drumming that concentration produces).

This show at the Replay was their debut performance, and as the boys churned out one physically-altering, soul-rupturing song after another, the crowd swelled inside the venue with appreciation. Here’s a sample of what they sound like, we highly recommend you see their next performance:

Next post Photo Gallery: Metric at the Beaumont Club