Pitch Purrfect: Local Musicians and the Cats They Love

Pitch Purrfect: Local Musicians and the Cats They Love

We’ve noticed a trend in the local music scene lately. It seems that most rockers in Lawrence share a common trait. They’re head-over-heels-in-love with their feline friends. We decided to profile some of the biggest cat enthusiasts in the area, and visit them at their homes to study their adoration for their four-legged companions. 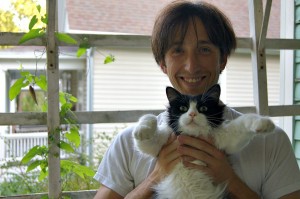 Bronco’s cat is a big lovable furball who mainly stays outside. At Bronco’s command, Sega Genesis will let himself be cradled, allow Bronco to wiggle his earls, and remains fairly docile and fluffy.

Bronco’s take on his relationship with his cat:
“This dude lays down some gnarly farts.” 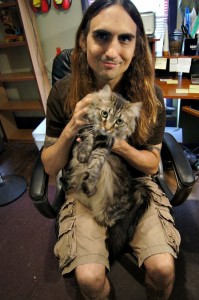 Although Stevie is not technically Terry’s cat, they do share a special bond. Stevie lives in the offices of Mammoth, a local music production company where Terry works. The two are nearly inseparable.

Terry’s take on his relationship with Stevie:
“We pretty much refer to him in the office as my ex-girlfriend stalker. He has to be wherever I’m at. He always has to be touching me, or holding my arm. It’s kind of weird, but kind of endearing.” 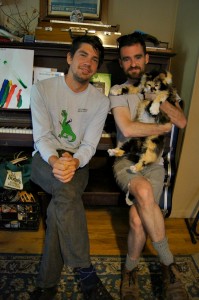 Never have we seen a man more passionate and loving towards his pet. Jordan and Taylor are friends for life, but their precious trifecta is incomplete without Ramona. All three live together in a cozy North Lawrence bungalow, where they spend their evenings basking in each other’s cherished friendship while making music. Jordan’s love for Ramona knows no boundaries, and this past winter he even organized and played at a fundraiser to raise money for her medical bills.

Jordan’s take on his relationship with Ramona:
“Ramona is wise and very loving at her advanced age (19). She inspires all the music that is conceived, rehearsed, and recorded at our house with her sleepy vibes.”

Taylor’s take on his relationship with Ramona:
“When I don’t want to misplace something, I always set it on top of Mona, because I know she won’t move! She also makes the best cat Kimchi. She’s my Korean Kat Protector.” 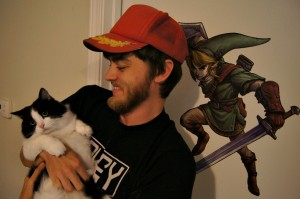 When we arrived at Mitch’s East Lawrence home, he was sporting a Radkey shirt and blaring the Mouthbreathers vinyl. The man really does love local music, and so does his cat. She became skittish when he stopped playing the record, and is known to snuggle into his guitar case while Mitch practices the guitar. The fluffy cat is said to have been an inspiration for many of Mitch’s songs, and even has her own Facebook page.

Mitch on his relationship with Sophie:
“Sophie is a fur factory who likes to ruin my clothes and bedding, in spite of the fact that I provide her with food and shelter, which is pretty punk rock for a cat. She decides what she wants and when she wants it. All who cross her path are merely pawns in her game. I don’t necessarily write songs about her, but she certainly is an inspiration at times.” 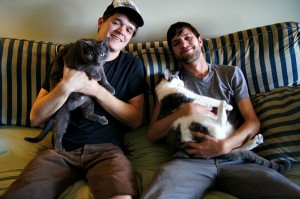 Name: Sam and Will Gunnerson

Sam and Will are two brothers who live in East Lawrence’s ultimate bachelor pad. The home is a mecca of movies and records, but perched atop this kingdom are their cats. Sam is especially fond of his feline, who has been replicated in a tour poster and allows Sam to cradle her and pose for the camera. 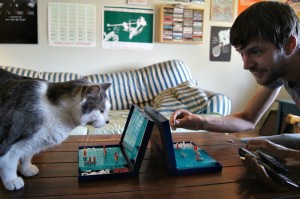 Sam on his relationship with his cat:
“The majority of songs are influenced from him. When I’m downstairs playing bass, cats really enjoy low frequencies. So when he rubs my leg or rubs my amp, I can tell that I’m onto something. Likes: He loves kitty stretches, huge fan of the kitty stretch. He likes the coffee table. He’s a big fan of ELO’s song ‘Showdown,’ it’s kind of his theme song. He really likes to eat, especially tuna. Dislikes: He hates riding in cars. He’s not a big fan of the vacuum cleaner and when we move equipment in and out of the house. He absolutely cannot stand being in the car.”

Will on his relationship with Lilly:
“Her real name is Lily, but we usually call her P.Y.T. (like the song “Pretty Young Thing” by Michael Jackson). She’s pretty shy, but definitely warms up to people. She and Lincoln (Sam’s cat) are pals for sure. Likes: sleeping, lazier pointers, the kitten stretch. Dislikes: when we move band equipment around or vacuum the house.”

Enjoy the cat photo gallery below.