I cannot remember the last time I saw such a large turnout at the Jackpot with so many unfamiliar faces. But with a lineup like White Denim, Cloud Dog, and O Giant Man, it was hard to resist the late night antics, even if it did happen to fall on a weeknight. All three bands delivered, but it was really Cloud Dog (in all their shirtless glory) who stole the show. 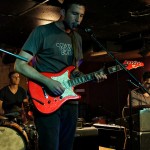 O Giant man, out of Kansas City, are about as perky and upbeat as you can get. The indie pop outfit opened the night up, but were already drawing in a strong crowd about three songs in. We couldn’t help but notice a few booties shaking along to the enthusiastic band’s set. 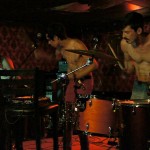 Cloud Dog may very well be the local party band of the summer. Oh, you’re not familiar? Allow me to introduce you.

Cloud Dog consists of three enigmatic fellers who don’t really care too much for clothes, but do devote all their attention to playing the drums. The boys, covered in war paint most of the time, summon every drunken and tipsy dancer within a fifty mile radius. They constantly layer extra reverby vocals in between electronic noises and loud, driving rhythms.

The entire experience, complete with red mood lighting, can leave you in a trance. That may explain the behavior of the audience, who immediately started shaking and grooving like sizzling pieces of bacon, and they didn’t stop until they were completely fried. Even the owner of the Jackpot, who normally sits perched on a stool and guarding the back door, was at the front of the stage nodding his head in agreement.

The band has played nonstop all summer, and you’d be wise to catch them before they head out on tour this fall. 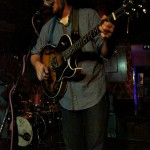 By the time White Denim took the stage, the Jackpot was alive with bustling activity and excitement.

The large crowd scrunched up towards the front of the stage, surely because that was the only way they could see those fingers flying up and down the fret. The boys in White Denim played so fast, I was worried I wouldn’t be able to catch them on camera.

They soldiered through a sweaty set that left folks whooping and hollering at every guitar solo.

Next post Photo Gallery: Childish Gambino at the Beaumont