A kind of kinship: Fake Natives to bring Manhattan flavor to Lawrence 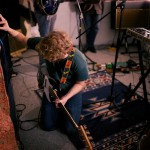 Lawrence doesn’t get to play host to too many bands that call the land west of Topeka home, but on Wednesday the Replay will be treated to one of the Little Apple’s finest. Fake Natives will come to us from Manhattan, and will be joining I Heart Local Music favorites Oils and C.S. Luxem at the local venue.

The band will be coming armed with a new album, and guitarist Dan Hornsby says you can also expect a bit of a show. “Lately it’s been some crazy costumes and feathers,” says Hornsby. “But we like to dance around and try to differentiate.”

Hornsby says the band has been working hard on getting their flavor out and about in Manhattan. They derived their band name while brooding over representation of Native Americans. “It gets kind of funny with music, because you have a lot of bands that commodify native names,” says Hornsby. “With this album, we’re thinking about native representation, or what it means to be from anywhere. Especially in America.”

It’s this kind of pondering and reflection that allowed Hornsby to find a release through making music. “I think pop music is important that way, it allows you to kind of move into other spaces with music and character,” says Hornsby. “For us that’s one reason we like to make music, it frees you from the logic of a lot of other media.”

Fake Natives may come from a small music scene, but Hornsby says tight communities like that only make the scene stronger. “It allows for bands who may not have cut it right away in a bigger town to grow and practice together. Whereas in other towns, they would have been choked out,” says Hornsby. “It feels really local, you have the same people coming out to shows and supporting bands like us.”

Hornsby and co also do their part to support local music in Manhattan. They host shows at their house (The Dead Bird House), and encourage bands to pass through on their way out of state. “A lot of bands will be coming through Lawrence, and they’re headed to Denver and trying to figure out something,” says Hornsby. “So we become a default for a lot of bands. It’s worked out for us because we get some good traffic through here and we can play with some good bands that we like at our house.”

On Wednesday, Fake Natives will be returning some of that traffic to Lawrence. They’re hoping to make a connection with the scene thanks to their longtime bond. “We’re at this point where we’ve been together for a couple of years. Just as people, we’re getting closer,” says Hornsby. “If we can get people to feel that kind of kinship and feel like we’re all part of our big thing, maybe what we’re trying to do is get people to escape for a little bit and dance… and have fun.”

You can escape (and dance if you want to) on Wednesday, February 29th, when you catch Fake Natives, Oils, and C.S. Luxem play the Replay.

Next post Where it's at: new Jackpot owners embrace live music