“It is a tale of two generations of brothers between the Civil War and World War I. It deals with the idea that evil is not inherent, and you have the choice to change yourself and what might be evil around you. It’s pretty much the most tragic thing ever written.”

Movie: There Will Be Blood

“I was obsessed with it for a really long time. I think the story is amazing. This oil tycoon rises to power in the early 1900s, shows general greed of what America is now just in one man. It shows how people do anything to get what they want, exploiting a whole community, his son, his entire family. It’s not only Daniel Plainview who’s exploiting, you also see the other side who takes over the community religiously and destroys his family as well and ends up with nothing. Those two are against each other, but they’re pretty much the same person. 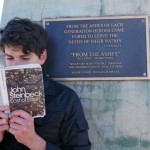 Also, the soundtrack really affected me. It’s just really powerful, especially because it’s sparse. The moments where there’s no music or no sound are really intense.”

“This is pretty easy for me because I don’t have a t.v. and I just have one computer game. Starcraft started for me when I was 11. It’s a real-time strategy game. It’s about conquering space. It’s the only game I know how to play, and I love it. I just recently got addicted to it.”

“It’s an art website. It’s where I get all my artsy fartsy news. Every day they have almost a new interview, a lot of post-modern natural art. They have great photography on there too, which I’m super into. Most of the people who post on there seem like assholes, but I still like it.”

Photo Gallery: Dean Monkey and the Dropouts / The Sluts

Shows you should see this weekend: New Year's Eve edition