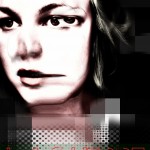 Nothing is really ever enough for Katlyn Conroy. The lovable local musician keeps herself busy with Cowboy Indian Bear, and every now and then she can be found singing onstage with several bands around town. But soon, she’ll be going out on a limb with some experimental new music.

Conroy’s latest musical project, La Guerre (which is french for “the war”), will invade the local scene on December 16th at the Record Bar. But don’t expect the calm crooning we’re used to hearing from Conroy. “I’m really concentrating on using new and interesting sounds and techniques that I haven’t used in the past,” says Conroy. “I’m going to try and make the live performance something really different than what I’ve ever done before.”

Although experimenting with vocal loops and sounds is a new venture for Conroy, this isn’t her first time tangoing with a solo album. In between playing with Cowboy Indian Bear and providing backup vocals for other bands, she’s built up a collection of songs. Now, Conroy says it’s time to clean house. “I’ve built up so much material I’m proud of, and I want to get it out there,” says Conroy. “I feel like getting it out there will make me feel less cluttered.”

Writing new music is second nature to Conroy, and that pride shows. She’s constantly uploading new songs and self-made music videos to her YouTube page. No matter the circumstance, one can expect a steady flow of material from the artist. “I think as a songwriter, I’ve always really been into the idea of consistently writing my own music,” says Conroy. “Despite what band I’m in, I’ve always been doing that on a regular basis.”

Conroy insists that a lot of her songwriting in the past has been underdeveloped, so she’s going to take a chance and open up with this new sound. “My strong points are lyrics and vocal melodies; and in this reincarnation of it, I’m trying to focus a lot on the music,” says Conroy, who will be recruiting the talents of several musicians in the area (including Hospital Ships’ Jordan Geiger) in an effort to mix it up. “I like putting myself outside of my comfort zone and trying new things and seeing how they turn out.”

See exactly how this turns out Friday, December 16th, at the Record Bar in Kansas City.

Carousing in the cold with The Kinetiks