The monumental Eleven Productions anniversary show will feature more familiar faces than you can shake a stick at, but you should turn your attention to one local musician bringing us new music after months of hard work and community support. 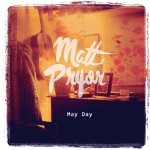 The fan-voted album art for May Day

Fresh off a European tour with the Get Up Kids, Matt Pryor is now focusing on Friday’s show at the Granada, and with good reason. He just wrapped up a massive community-backed project. The songwriter used the website Kickstarter to fund a new solo album. While his first solo album, Confidence Man, was released on Vagrant Records, releasing the new record independently was essential. “I wanted to do the Kickstarter thing,” says Pryor. “It seemed stupid to help me raise money to give my record to another label to put out.”

So he launched the project and named the record May Day, after deciding to give himself until the month of May to finish writing songs and finally get the idea in motion. He offered enticing prizes for those who donated, including tickets, limited-edition merchandise, and even personalized songs.

What happened next was unexpected and shocked Pryor. After setting a $10,000 goal for the project, more than double that amount was donated in less than a month. $23,996, to be exact. “I was expecting to not reach the goal, because I thought we had set it too high at $10,000,” says Pryor, who admits that seeing that kind of support was just the boost he needed. “It actually kind of made me feel excited about doing this again. To be completely honest, I have been a little burnt out on making and playing music, and this overwhelming support reinvigorated me.” 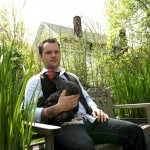 Lawrence concert-goers love a good party, and Pryor is no exception to the rule. The Eleven Productions anniversary show may be a big ordeal for the local music scene, but Pryor says gearing up for the show feels like getting ready for a party. “Local gigs are usually stressful for me because I know too many people. This is more of a celebration and less of a gig,” says Pryor. “I see people who are playing, and I’m like ‘Hey, Friday! It’s gonna be crazy!’ It’s like we’re talking about a party at somebody’s house.”

Pryor may be one of the biggest fans of this community. He resides in East Lawrence, where he’s currently involved with the Eastside community. He’s also trying to get on his Neighborhood Association board. But nothing sets him apart as a true Lawrencian more than his love of kickball. “My wife actually started a Kaw Valley Kickball team, I only got to play in four of the games,” says Pryor. “I had no idea I was going to like it as much as I do.” He even recalls a moment during a tour with the Get Up Kids this summer when he longed to be on the kickball field. “I’m sitting in my hotel room in Australia pissed off because I can’t go to the kickball game,” says Pryor, who admitted he had to laugh it off. “I thought ‘Wait a minute, I’m in Melbourne. I should go do something.'”

He’ll have plenty of time for kickball in the coming year. After he releases the new record and plays a few shows, he plans on enjoying a lazy summer. “I’m not going to tour,” says Pryor. “I’m going to work in my garden and play with my kids and play kickball, and it’s going to be awesome.”

Before he delves into a world of kickball and gardening, catch Pryor at the Granada on Friday; and keep an eye out for May Day on January 24th.

1. Don’t Let The Bastards Get You Down
2. The Lies Are Keeping Me Here
3. Where Do We Go From Here
4. Like A Professional
5. As If I Could Fall In Love Again
6. Polish The Broken Glass
7. Unhappy Is The Only Happy That You’ll Ever Be
8. As Lies Go… This One Is Beautiful
9. Your New Favorite
10. You Won’t Get Any Blood From Me
11. I Was A Witness
12. What My Tired Eyes Would View

Next post A farcical farewell: BaioWolf to go out with a bang