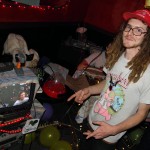 When I rounded the corner of the Taproom to get to the staircase on Thursday night, I immediately stopped in my tracks. The entrance was flowing with streamers, and balloons were spilling out of the basement. “Oh right, this is a launch PARTY,” I thought. I had arrived for a night of mayhem for the Whatever Forever Label Launch Party, where four bands were set to take the stage for a most unusual event. Little did I know just how bizarre it would turn out.

I took no more than two steps into the venue and was greeted with a large cake, several pizzas, a cupcake pinata and even a ninja turtle anti-drug poster. There was a television playing Star Wars, robots barking at me from every direction and a table full of face paint. This very easily could have been an SNL Stefon sketch. 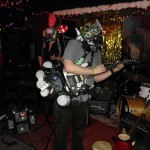 Agent X-12 was up first. He looked like some sort of glittery robot predator. He began his set by scattering what I can only describe as little robot cockroaches all over the floor. Throughout the night, those things would travel to all corners of the Taproom. Every now and then I would feel something crawling on my foot, and when I looked down I found the metal bugs scuttling away. They even made their way to the bathroom. Agent X-12 then proceeded to play metal riffs on his cartoonish guitar while the crowd randomly whooped and hollered. 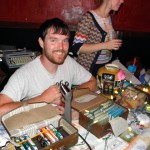 The folks responsible for this bizarre party are also the folks behind the (now defunct) Pizza Power parties. Because they have such extensive experience throwing house shows, the Taproom truly got transformed into a house party. I turned around to find one of the bartenders happily chomping down on some pizza that the Pizza Power guys gave him (that’s the giving spirit of the party promoters). When I asked him what he thought about the transformed venue, he said “People have gone the extra mile as far as decorations down here, but that (points at the decorative lights) is pretty intense.” 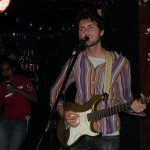 One of Agent X-12’s robot dogs was peeking out from behind a bongo, bobbing its head to the music, when Oils began their set. The band is comprised of just two people, but they can definitely hold their own.

The songs generally start with a little finger picking, but gradually build until the lead singer’s hand is speedily strumming across his guitar. The singer has such great stage presence, it’s fun to watch him hop up and down during the band’s poppier tunes.

This Is My Condition 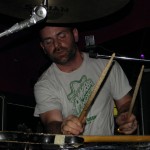 This Is My Condition

After carefully bandaging his guitar up, the one-man-band known as Craig Comstock immediately dove into his loud, frenzy of a set. I remember seeing him in 2003, and can tell you he’s definitely gotten intensely louder and faster since then.

He planted himself in front of the jukebox and used all of his force to bang on his drum set and guitar at the same time. At first it may seem like careless and scattered drumming, but each strike is carefully placed on specific strings on the guitar, his sticks occasionally sledding up and down the neck. While this is all happening, he screams like a madman into a flailing mic.

The act is a one-man-ass-kicking, and you may very well end up knocked to the ground by the sheer amount of madness. You’ve got to be damn near legally insane to come up with stuff like this. Take cover, because this is what it sounds like:

Comstock doesn’t even have to loop his guitar that often, that’s just how fast he can play. Near the end of his set, the songs would change from soft and sweet to jarring and disturbing without any warning whatsoever. This Is My Condition is horrific good fun:

Dean Monkey and the Dropouts

It was bound to happen. Wherever there are balloons, a clown is bound to show up.

Word on the street is that whenever doo-wop group Dean Monkey and the Dropouts perform, there is always some sort of schtick (like the time they played in their underwear).

Tonight, however, the schtick was just too much for me. The six or seven piece band decided to all don Juggalo makeup. Every. Single. Last. One of them.

I hate clowns more than I hate anything in this entire world. They’re disgusting, pathetic little creatures, and I don’t understand how anyone can think that clowns should be responsible for bringing happiness to a child’s birthday party. The only thing I hate more than clowns are jugglos. So watching this group perform sweet little doo-wop songs about hipster girls was a real tough pill to swallow when they were all dressed as horrific nightmares. After a couple of songs I had to turn my head and stare at the wall while they were playing just so I wouldn’t lose my mind.

I’d like to see this group play again, their songs were cute and catchy. But if they ever sport that clown makeup again I am going to throw a shitfest. This goes beyond the point of trying to be “ironic.”

Now if you’ll excuse me, I’m going to try and avoid having nightmares over the next few days. I am SO NOT down with the clown….