Editor’s Note: We so very much loved Katlyn Conroy’s previous mixtape that we invited her to contribute on a regular basis. Please enjoy this post where she interviews local musicians about what they’re looking forward to this Summer. We are particularly fond of the cute little graphics she’s inserted into the post. 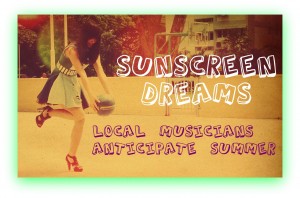 Summer is getting closer every day. Other than the excruciating humidity and unpredictable weather (honestly, when isn’t it, though?), I was curious about how some of your favorite local musicians killed the time and what they were looking forward to come this summer. Also, their favorite aquatic animals. That’s right… I was curious.

What is your favorite summer album?

If you could put a stage anywhere outside in Lawrence/KC and play, where would it be?

Brendan Hangauer (Fourth of July): On top of Jensens Liquor Store.
Jordan Geiger (Hospital Ships): In front of La Prima Tazza.
Richard Gintowt (Hidden Pictures): I’d like to see a festival outside of The Outhouse, just so I can say I “played the Outhouse” and have more street cred when I hang out at The Replay.
Sean Wilson (Baiowolf): The roof of the Granada.
Drew M. Gibson (Baby Birds Don’t Drink Milk): On top of the parking garage, ‘cause the Vehicle Blues / BBDDM show that happened there several summers ago was super real.
Kristen May-Little (Vedera): Loose Park.
Austen Malone (Spirit is the Spirit): Definitely the Checker’s parking lot.
Lauren Krum (The Grisly Hand): The lawn of the Nelson. It’s one of my favorite places ever and shuttlecocks are something my band would have a hayday with.
Kyle Sheline (Mansion): House boat shows!
What is your favorite summer beverage?

What’s a summer song you’d like to never hear again?

Brendan Hangauer (Fourth of July): The Cha Cha Slide.
Richard Gintowt (Hidden Pictures): Anything from “Grease”.
Austen Malone (Spirit is the Spirit): I would be ok with not hearing whatever the hell “song” Kid Rock somehow became relevant again with.
Kristen May-Little (Vedera): Anything by Ke$ha.
Lauren Krum (The Grisly Hand): “Summer Girls” by LFO.
Kyle Sheline (Mansion): The Sublime one.
What summer song would you like to cover?

Brendan Hangauer (Fourth of July): “Long December” by the Counting Crows.
Jordan Geiger (Hospital Ships): Any R. Kelly song.
Kristen May-Little (Vedera): “Is this Love” by Bob Marley.
Richard Gintowt (Hidden Pictures): “Summerlong” by Kathleen Edwards.
Austen Malone (Spirit is the Spirit): “Summer Breeze” by Seals & Crofts.
Sean Wilson (Baiowolf): “Summer Girls” by LFO.
Kyle Sheline (Mansion): “Summer of ‘69” (with Brad Shanks singing it) by Bryan Adams, ‘cause Sean Baiowolf hates it.
If you could design a swimsuit, what would it look like?

Brendan Hangauer (Fourth of July): A full body one-piece with a gimp mask and a zipper mouth.
Jordan Geiger (Hospital Ships): Cut off shorts made out of a marching band uniform.
Austen Malone (Spirit is the Spirit): It would consist of some sort of dainty little fabric, silk perhaps; or maybe lace. Whatever the case, it would essentially be a “tube top” concept. Maybe two-three inches in width that I would wear on my head. 1) To keep my hair safe and under control while enjoying the water and 2) to allow maximum air to skin ratio for drying and soaking up all those dandy rays.
Sean Wilson (Baiowolf): Iridescent speedo (bikini briefs) with a utility belt and waterproof sheath for a large knife.

Talk about a summer music memory.

Richard Gintowt (Hidden Pictures): Touring with Ghosty and Son Ambulance summer 2003-ish. Learning all the lyrics to Bruce Springsteen’s “Working on A Miracle” and singing it at the top of our lungs.
Beau Bruns (Cowboy Indian Bear): I got to play at a ridiculously huge and awesome water park and we got free food and beer and entrance to all of the parks attractions.
Drew M. Gibson (Baby Birds Don’t Drink Milk): Most of them involve yelling CHOMP WOMP while looking for food in the pizza hut dumpster, though Impaling my left arm on a fence and going to the hospital on the 3rd day of a 2 month tour sounds cooler.
Kristen May-Little (Vedera): On tour with the Wallflowers we played some amazing outdoor venues like botanical gardens and outdoor venues where people brought their own liquor. Summer tours are the best!

Kanrocksas is coming up this late summer/fall. If you could host your own ‘Kanrocksas’, what 5 bands would you want to play?

If you could have any aquatic pet, what would you have and why?

Sean Wilson (Baiowolf): Giant Seahorse. So I could ride it, dawg.
Beau Bruns (Cowboy Indian Bear): My cat, Hoot, in a full wet suit and kitty scuba gear. Why? ‘Cause he’s the shit. Boom!
Christopher Robbins (O Giant Man): A Whale Shark. It’s my girlfriend’s (who’s studying Marine Biology) favorite animal. I’d love to have the whale just to make her happy. She’d be stoked.
Richard Gintowt (Hidden Pictures): Well, I have a beta fish and he seems pretty bored with his life. Fortunately he can only remember things that happened three seconds ago, so he can’t dwell on it too much.
Jordan Geiger (Hospital Ships): Ramona.
Favorite summer read? 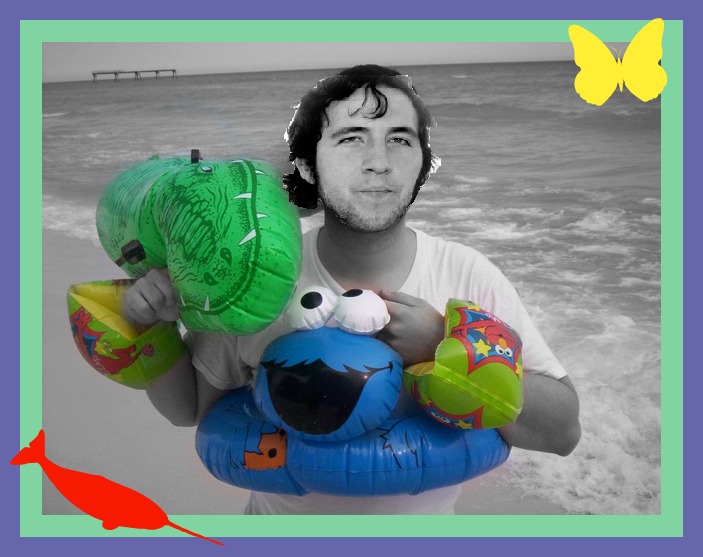 What are your 5 ‘porch essentials’ for the summer?

Is there a particular concert or event you are looking forward to this summer?

Brendan Hangauer (Fourth of July):  Spring into Summer @ the Replay!
Jordan Geiger (Hospital Ships): I am looking forward to a house show May 14th the most!!!
Richard Gintowt (Hidden Pictures): That Train / Maroon 5 double bill is pretty enticing… if they collaborate on “Hey Soul Sister” i’m just gonna DIE!
Drew M. Gibson (Baby Birds Don’t Drink Milk): A Vehicle Blues dj set after a VHS screening of hackers being broadcast onto the second internet would be ideal. Though anything at the Church of Malt Liquor sounds like a good time
Austen Malone (Spirit is the Spirit): Im looking forward to ALL THE AMAZING BANDS AND MUSIC that IS Lawrence in the summer time. Late night shows at the jackpot, fun times at the Bottleneck, and ALL that crazy ass dancing at the Replay outside with those fine DJ’s.
AFTERTHOUGHTS: