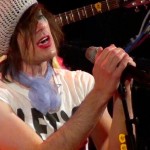 On Saturday night when I was walking from my car to the Of Montreal show, I walked by the alley behind Liberty Hall and found the band playing ping pong (table and all) and skipping rope.  This might have struck some people as odd, but this is pretty typical behavior for the three-ring circus that is Of Montreal.

When I arrived at Liberty Hall, it was sequins, leotards and feathers as far as the eye could see. Folks arrived in style and in full force. The band is known for featuring bizarre costumes (and behavior) during their live performances, and the fans came out in full support of the band’s offbeat style.

Here’s what they opened with:

It wasn’t long before we got a full dose of the far-out fashion. Within the first 15 minutes, we got introduced to Mexican wrestlers, some sort of booby bat-ear things and a duo in full on American flag apparel. It was like an SNL Stefon sketch times a billion. This show had a crab slow-motion fighting two pigs, a wedding gone awry and a human horse. That’s when two dudes carry in another dude on a saddle.

Here is some NSFW video, featuring those booby beat-ear things:

It didn’t matter whether the band was dancing or participating in some Mexican wrestling, the choreography was slick as hell.  The longer the night went on, the less it felt like a rock show and more like a paranormal experience.  The light show they had rigged up just for the performance kept reminding the crowd they were truly in a peculiar place. Who needs drugs when you’ve got an Of Montreal show? 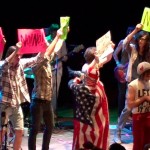 But the flashy-dressed crowd never stopped dancing.  Even the old folks in the balcony were standing up and cheering.  The cheers got even louder when the opening band joined Of Montreal onstage, holding brightly colored signs up in mockery of the ever-disgusting Westboro Baptist Church (Fred Phelps and Co.). They flashed the crowd signs with words of encouragement, such as “God made rainbows gay, not gays,” “Love it and or leave it,” and “I came.”

Forgive us, we started recording this video a bit late:

After a fantastic cover of the White Stripes’ “Fell in Love with a Girl,” the band ended the night with nearly all of them donning Lucha libre masks and it wasn’t long before they were all fighting and body slamming each other.

The show ended with an emotional rendition of America the Beautiful on the fiddle (the entire audience sang along), followed by a hoedown. It fit in perfectly, since folks had been chanting “USA! USA!” throughout the entire night.

We managed to snag just a few seconds of their big finish on video:

The best thing about this band is their relationship with Lawrence. They could dress and act this way on the street here, and nobody would bat an eye. This was evident when they were playing ping pong and skipping rope in the alley at the beginning of the night. Of Montreal, you will always have a second home here in Lawrence. Please visit often.

Please check out a wonderful photo gallery of the show here.