On Saturday night the Jackpot played host to a stellar lineup. Cowboy Indian Bear was set to debut a lot of new material, and openers Stik Figa was just as charming as ever. But one of the nicest surprises of the night was getting introduced to the ever-experimental Haii Usagi. 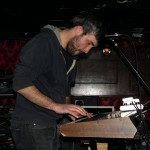 Haii Usagi had a big of a hiccup at first. About 30 seconds into their set, they had to stop and fix some technical issues. But it didn’t matter. Those 30 seconds were so great that folks were already coming in from outside and rushing up to the front of the stage.

I don’t get to see as many electronic acts in Lawrence as I’d like. Although Haii Usagi hails from Missouri, I was still delighted to see something like this in Lawrence. The band is comprised of just two people: one man with fingers flying across the keyboard, and a drummer backing him up with a steady, dancey beat.

It’s pretty hard to sit still during a Haii Usagi set, and pretty soon (one by one) the ladies started shaking their hips. The band played so hard that the drummer ripped a snare (but no worries, Cowboy India Bear’s drummer came to the rescue with a spare). 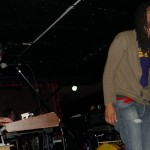 One of the more touching moments of the night was when the band called up Cowboy Indian Bear to join them onstage. Right before he started rapping, Mary Hillard demanded everyone close their eyes. Then he dedicated the song to his grandmother (everybody say “Awww…”). Seeing collaborations like this between bands is always a real treat, regardless of how well it goes. In this case, it was a touching moment that everyone was happy to witness.

(I apologize in advance for the poorly lit video)

At the end of their set, the keyboard player said “It’s always fun coming to Lawrence. I like this town.” Well then, maybe you should come back. And often. Because that was some truly enjoyable music. 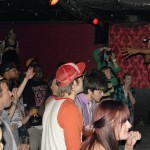 It really didn’t take any time at all for folks to just absolutely lose it for Stik Figa. Over the past year, I’ve really become a big fan of this guy, and for good reason. Nobody gets a party started like Stik Figa. Nobody. I will fight you over this.

The ever-so-charming Stik burst into the set with “Hello.” It got the crowd so pumped up and answering back every time he said “Hello.” Stik jumped about the stage, constantly dancing his signature moves on the speakers at the front. No performer in Lawrence has better stage presence than Stik Figa.

Always the jokester, and master of loving fun, he kept the crowd eating out of the palm of his hand. You can’t help but feel a little bit of pride every time he yells out “seven-eighty-five!” We’re so proud to claim him as one of the area’s finest. 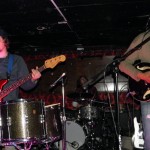 After four months of touring, Cowboy Indian Bear finally returned to the Lawrence stage with tons of new material. If that weren’t enough of a treat, they also got some fancy new lights to go along with their show. A nice feller in the back worked the light show on this night, and it really was a visual treat.

The band started off their set with a sexy and slow number (new music!), and also brought along some old favorites. It didn’t matter whether it was new or old, their tunes got the same ecstatic response from the crowd. 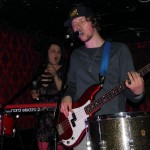 You could really tell how hard they were working on the new material. They definitely rocked out onstage to their older stuff, but when they busted out the new songs you could tell they were really concentrating and putting lots of effort into it. The new material is so beautiful and well thought out, and it went over well with the crowd. Also, area-band The ACBs contributed to one of their new songs. I love The ACBs like crazy and can’t say enough good things about them. So I was elated to learn of the collaboration. Please check out their latest album “Stona Rosa” by clicking here.

Drummer Beau Bruns is someone I’ve been keeping an eye on lately. When I first started watching the band a couple of years ago, he was fairly quiet in the back. But now he really just rocks out and puts his whole body into it, constantly tilting his head from side to side. It’s really become quite a pleasure watching him come out of his shell.

Everyone in the band is fun to watch, when you come to think of it. C.J. Calhoun and Marty occasionally roll up on the tips of their toes when they’re singing into the mic, and Katlyn Conroy is always a mover and a shaker (as was quite evident during their final song). 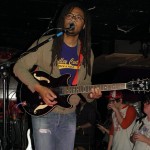 When the band played “Bear vs.,” I hadn’t seen folks so amped up during what’s usually a soft and easy-going Cowboy Indian Bear set. A very excited group of beautiful young women were front and center, and singing along quite loudly from the beginning of the song. The band didn’t even have to sing during one part, Marty just leaned into the mic and said “Sing it, ladies.”

They ended the set with “Heart Be,” and made the song a lot more dancier than what you’ll hear on the album. It was beautiful and climactic, and the perfect way to end the set.

Cowboy Indian Bear put a lot of thoughtful consideration and effort into this show, and that’s become a regular habit of theirs with all of their performances. Here is a band that cares very much about the audience, and often times that feeling is reciprocated. They deserve nothing but every ounce of happiness that comes their way, and if they keep this gracious, humble and neighborly attitude, that may very well just happen.

Pizza Power is moving (sort of)