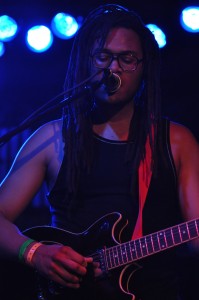 On Saturday Lawrence is throwing a sweet homecoming for local darlings Cowboy Indian Bear. The band has spent months on the road, and hasn’t played a show in Lawrence since the Noise for Toys benefit at the Bottleneck in December.

This has left fans a little antsy, but semi-newly inducted member Katlyn Conroy says leaving that much time between the shows has all been part of the plan. “This is the first band I’ve been in that’s really smart about booking,” says Conroy. “We’ve played so much in the Midwest and around Nebraska and Iowa and Missouri. I feel like word of mouth goes around really well in the places we’ve been playing.”

Conroy and her bandmates have been finding luck in some nearby cities, namely Omaha. “I think we’ve found that there are a lot of people who are supportive and attentive, they tend to keep coming back and telling more people about it,” says Conroy. “It seems we’re growing fan bases in other places faster than I thought we would.”

A skyrocketing fan base is no surprise. The band has been admirably dedicating time and effort to playing shows around the Midwest, and has been testing out some of their new material. But on Saturday, they’re bringing that thoughtful dedication to the Jackpot. 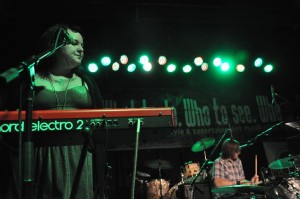 They’re not coming home empty-handed. “I think they can expect to hear all but maybe one of our new songs,” says Conroy. The band is about a third of the way through with recording a much-anticipated new album, and hope to be finished by the Fall. “We’re going to be breaking out all of our new songs,” says Conroy. “I think the first album was pretty good in variety and we’re going to try and keep that same thing going.”

The band recently played at Kansas City’s Middle of the Map Fest and debuted some of their new material there (you can watch video of that below). There’s definitely a more sensual feel to their music, and Lawrencians can expect to see some of that on Saturday. “Some of our new songs have tended to be sexier, ballady kind of songs,” said Conroy, who noted writing the new material is what the band thrives on. “I think we just care so much about each other, and we know how important it is to each of us,” says Conroy. “We thrive on making music and putting it out there. I think we would all be in a dark place if we weren’t doing it.”

Well, the band is definitely not in a dark place. Their happy homecoming is creating quite a buzz around town as folks gear up for Saturday night. The band couldn’t be more excited. “The wait is finally over,” Conroy said with a big sigh of relief. “We get to be around all our friends. Even in Kansas City, it’s close but it’s not the same. We’re excited to finally be back in this atmosphere.”

Catch the band and their new material on Saturday night at the Jackpot along with local rapper extraordinaire Stik Figa and the ever so experimental Haii Usagi.

Holy crap, it's a real thing: The Church of Malt Liquor