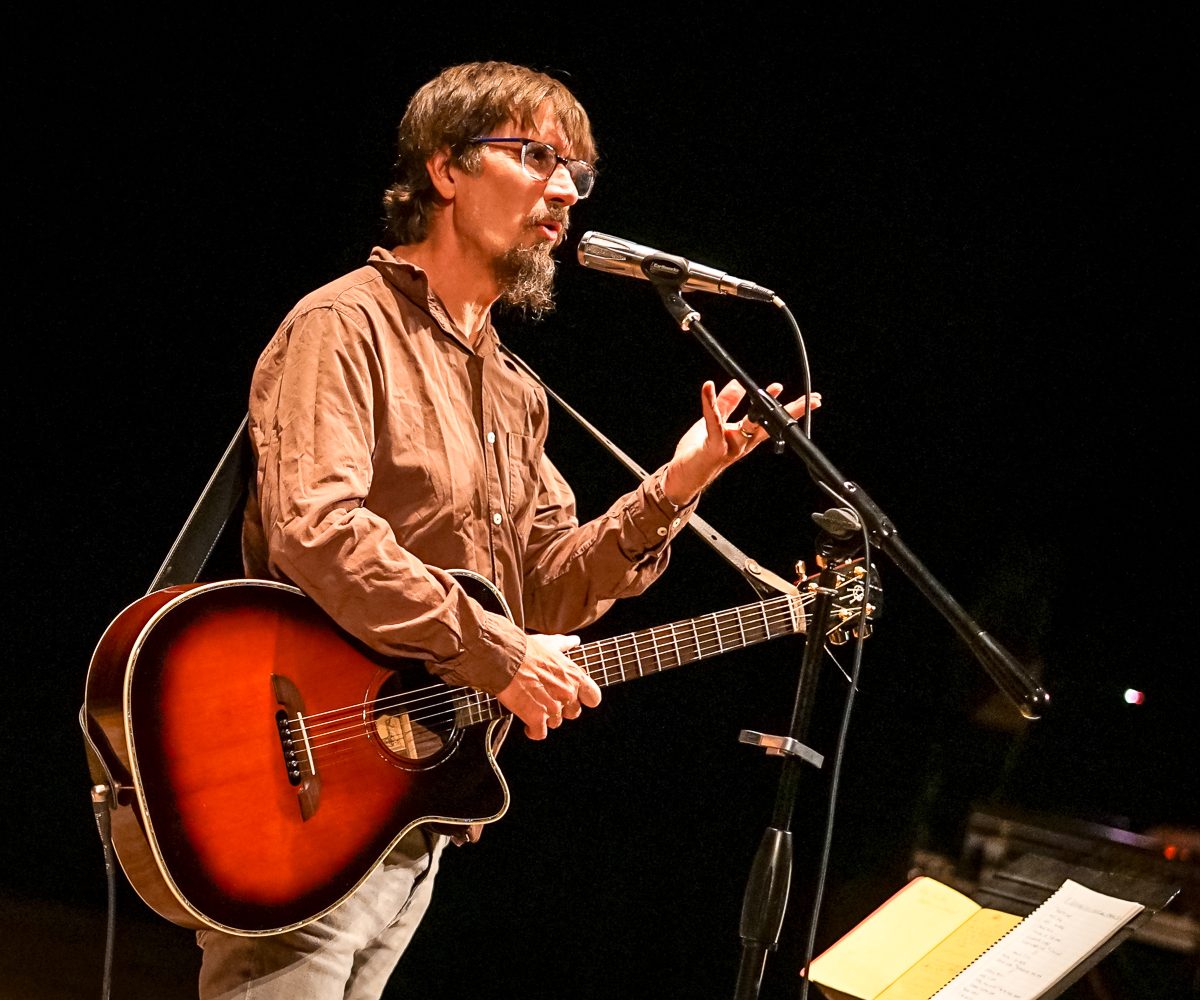 Facebook0Tweet0LinkedIn0Pin0
There’s a real art to onstage banter, and The Mountain Goats’ John Darnielle has mastered it.

On Saturday he brought his solo performance to a fairly full Liberty Hall crowd, where he officiated the marriage between story and song. After nearly two years in isolation, it was a welcome experience for music fans. He brought that same exciting energy he (a sort of reformed metalhead) normally brings with the full band, but we got all the intimacy of a stimulating conversation and chuckle-worthy anecdotes. “How long is your patience for long stories?” he quipped at one point.

Every song was preceded by a seemingly stream-of-consciousness story. The Mountain Goats recorded two albums back-to-back, Getting Into Knives and the brooding Dark In Here, though they were released further apart. Putting out albums during a pandemic is no easy task, and a solo set (as was the norm during the early years) is likely the best approach coming out of shutdown while navigating the Delta variant scene.

His energy was infectious. Darnielle, joined only onstage by a piano, didn’t let the large space swallow him. He did a sort of waltz forward and back, dancing and hopping around the mic. His hefty setlist was accompanied by an engaged crowd, who often sang along, clapped heartily, and hung on his every word (even when he was showing them the scribbles on his illegible notes). It was transparency at its finest for a solo musician.

In sharp contrast to Darnielle’s chattiness, opener Sophia Boro sported a shyness that would match Princess Diana’s. Boro is a soft-spoken conversationalist, yet as soon as she fired up a song on her guitar, her powerhouse Annie-Lennox-esque vocals blew the roof off of Liberty Hall. The audience fell for her. Hard. She was a self-proclaimed shy drama nerd, but it didn’t matter to the newly indoctrinated fans. “I’m so awkward sometimes,” she would giggle between songs, to which the crowd would just let out a heavy sigh and say “awwwww.”

Boro looked like she was plucked from the feel-good pages of the 1996 Fall Delia’s catalogue, but with endless acoustic guitar ballad charm. Oh, if only Lilith Fair were still a festival– she’d surely be on the lineup! She almost felt bad for playing the sadder songs, but her fans were wrapped around her guitar-plucking fingers anyway. She closed by stressing the value in an intimate live show like this one. “I think it’s an important communal experience for me,” she confided at the end. “You all feed me just as much as I feed you all.”

Photo Gallery: Elton Dan and the Rocketband at The Bottleneck