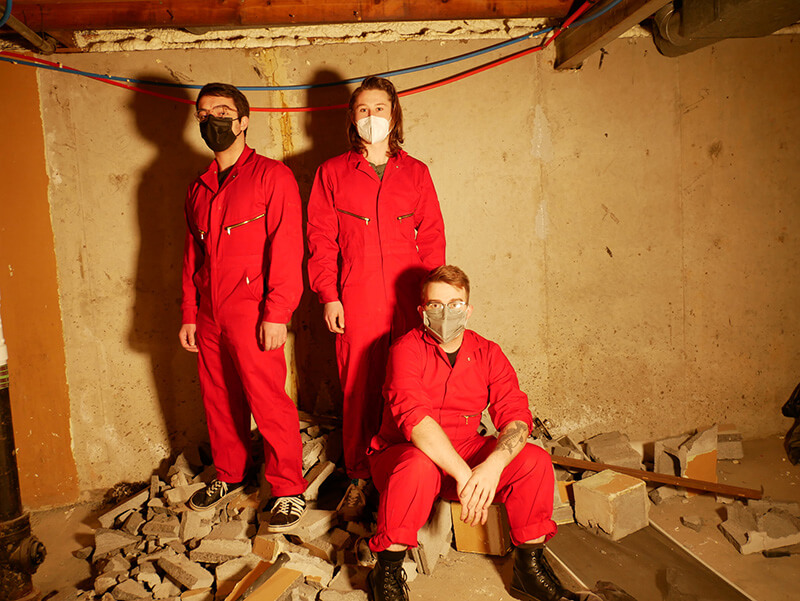 Leave it to one of the scene’s most DIY bands to stay busy during the pandemic. Nearly three years after their last release, You’re Lucky I Like You brings the band to a new level in their quest to conquer emo. We talked with frontman Griff Nelson about the band’s new album, and what the live scene (including changes for the DIY scene) will look like after COVID-19.

IHLM: How did Chess Club spend their time during the pandemic?
GN: The first month or two we didn’t practice at all. The pandemic was so new at the time, it was a little nerve wracking to think about doing anything. We had already recorded eight songs, but we all agreed that we didn’t want to release them yet since the future was so uncertain. We eventually started practicing again, and since there was nothing else we could do, we wrote more songs. We came up with four additional tracks that were high energy, and we thought they complimented the previous eight songs nicely.

IHLM: What’s something you’re looking forward to when live music returns post-COVID?
GN: Live music is such a raw experience. We’ve spent most of our years as a band playing in venues, bars, and houses. All of those are different in their own way. But one thing that is consistent between them is the human connection. Once we start playing shows again, it’s going to be a very emotional moment for all of us. And that moment is going to be incredibly special for me.

IHLM: What inspired you to make this album at this time?
GN: We knew that we wanted our next release to be a big step ahead of what we’ve done previously. We went into a professional studio, worked with a label, and crafted what I think is some of our best material to date. We are always aiming to try something new on every record. Once we knew that the pandemic was going to last for a while, we all agreed that we couldn’t just put everything on hold until it was over. It’s been challenging, but honestly that’s a big part about what has always motivated our band. The world may have been in a standstill, but we didn’t even look at that as an option.

IHLM: What would you like to see more of in the Lawrence music scene?
GN: I would like to see more variety shows. It would be great to see multi-genre sets being put together. I’ve been inspired by the DC Funk/Punk shows that happened throughout the 80’s (and so on). Having bands like Trouble Funk and Minor Threat on the same bill sounds like it was a blast. Doing something similar in Lawrence would be amazing. We got to experience some of this with our Farmer’s Ball 2019 set when we got to play with acts like Tione, Oxford Remedy, and The Royal Chief. That show will always be one of my favorites. People seemed to have a great time. It was truly special.

IHLM: Your band is pretty big on DIY. Where do you see the DIY scene going in the next year?
GN: DIY shows are gonna be difficult, especially in terms of house shows. The charm of a house show is how it’s officially unofficial. It’s a comfortable environment. It’s a change of pace from a venue, it’s even more personal sometimes. However, making a house show safe is going to be tricky. In terms of our band, we will always continue to try to do as much stuff ourselves. Since day one we’ve always set up shows ourselves, demoed music ourselves, booked tours ourselves, etc. That DIY mentality will never leave us even as we expand to other avenues for our music. We’ve created countless friends and connections through the DIY scene. Not a day goes by where we don’t interact with someone who has supported us along the way.

I Heart Local Music Presents: The Return of Live Music with Cuee / Approach on the 1's and 2's