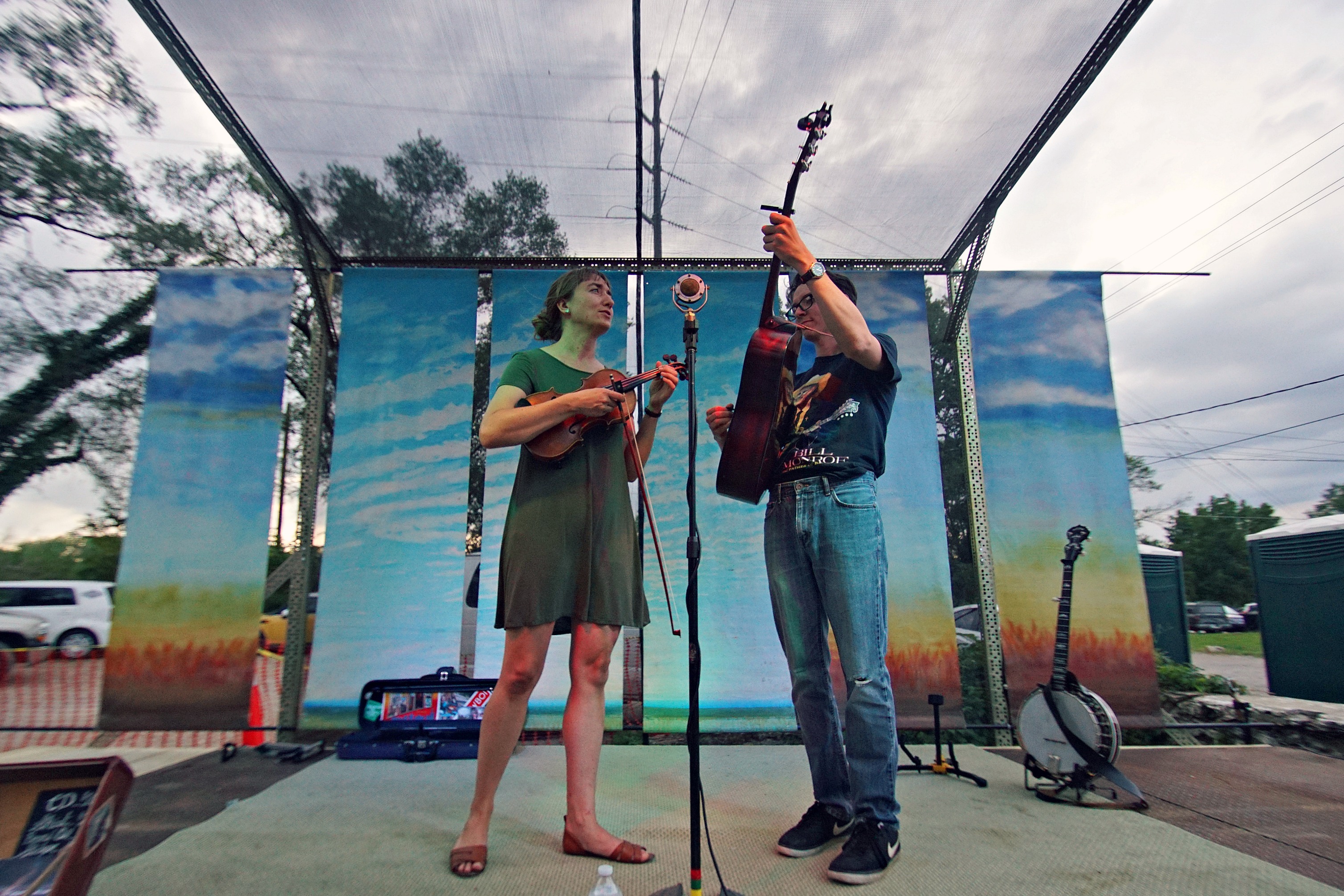 Oh, the cicadas never stood a chance. The sounds of FidPick are officially in the air, drowning out the regular sounds of Summer we’re used to hearing at this time. Guitars, mandolins, fiddles… every form of folk will ring loud and clear from now through the big event on Sunday in South Park.

To kick off all this bluegrass business, the Gaslight hosted the most wonderful night. They built a special stage– “Winfield style,” as one patron put it– consisting of a trailer with a little fence, a sky-clad backdrop, and a handful of lights. It was quite an ingenious use of space, actually. They stacked booths for beer, food trucks (the Burger Bus!), and seating areas all against each other, Tetris style. Most people opted to camp out in lawnchairs (this is the Midwest, after all) and rub elbows with their neighbors, unless they were on their feet and dancing with babies and toddlers. And dogs! There were so many dogs! And they were all begging for pets and baby talk!

The parking shortage was unreal. Folks were parking all along the surrounding streets and crossing the world’s least friendly intersection, dodging traffic in a sprint towards it all. Wakarusa Roundabouts, The Matchsellers, and Unfit Wives all hit the small stage under a starry and partly cloudy sky with weather that was to die for. But industrial sized fans were still scattered everywhere to cope with whatever humidity was left. Fans blowing at full speed ahead, left, and right. Hold onto your sundress!

But the cicadas were no match for the show (even those burly North Lawrence cicadas). Can you imagine? Just a fiddle and guitar from The Matchsellers at that volume? On a Friday? On a PAYDAY?? Everyone was on the hunt for fun, and they found it at the Gaslight thanks to their clever setup. One can only hope this friendly-styled space makes a reappearance.

There are FidPick events scheduled throughout the weekend at various venues (Americana will host a Saturday full of folky fun). The only weekend that could possibly be more magical than FidPick weekend is Winfield– and lucky us, The Matchsellers had a song about Winfield full of their hilarious dry wit. You can watch it below:

Why Some People Almost Always Make/Save Money With World