Here’s your chance to support women this weekend

Here’s your chance to support women this weekend 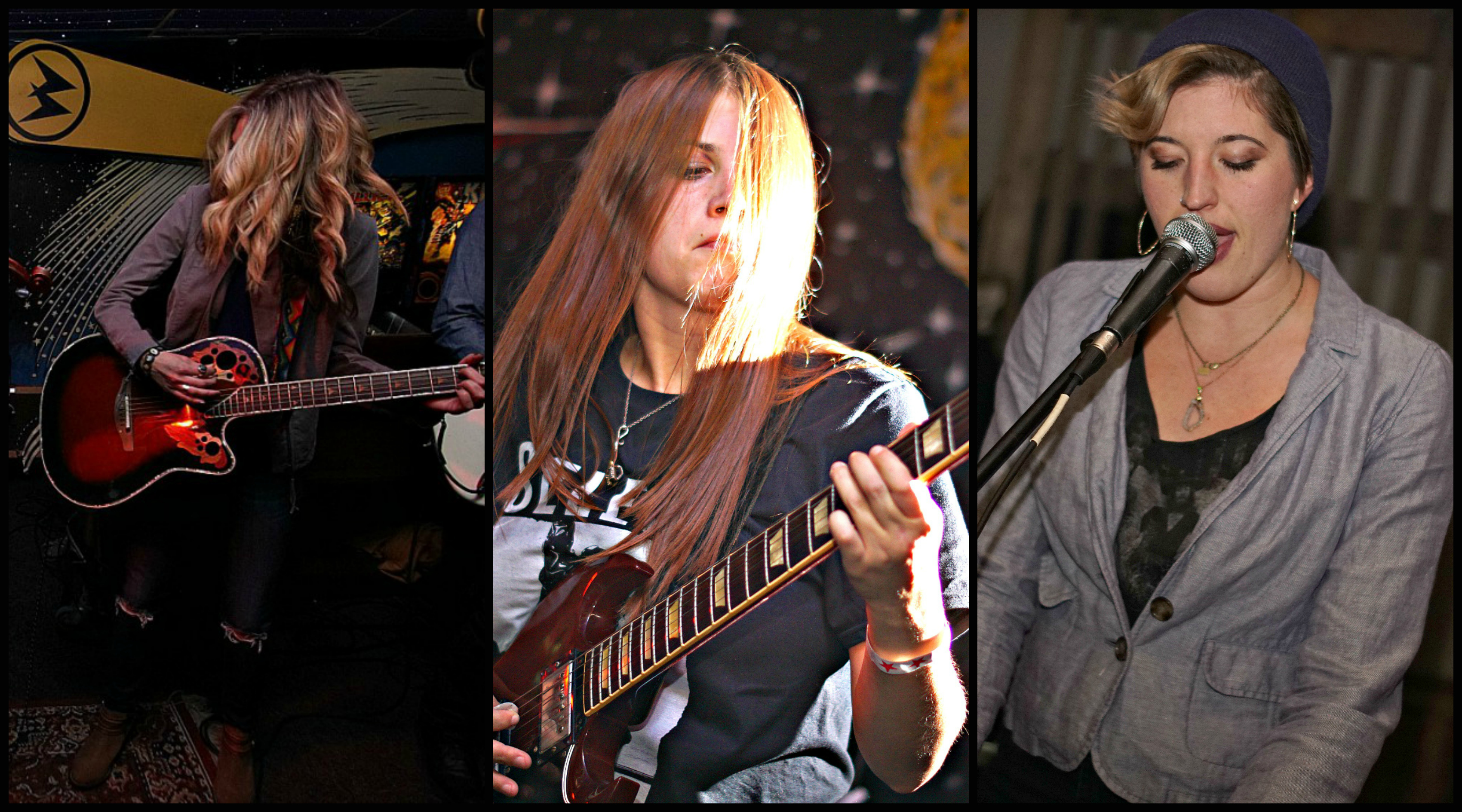 For no reason whatsoever, we decided to (completely out of the blue), clue you in on a chance to support women in the music scene this weekend. Here are some shows you can go to in Lawrence where you can pay money (to women) to see them play and (perhaps) also pay them for merch and copies of their music.

Editor’s note: In order to get this out in a timely fashion, for some of these shows, we’ve pulled descriptions of the shows from the band’s event pages on Facebook, which we’ve linked to.

This is the only all-female-lead lineup of the weekend, featuring the looping effects and stellar songwriting skills of Kat King. The evening will also a rare appearance from spooky folksy duo Scotti Sullivan and Johni Lacore of Mourning Ritual and a special appearance from members fo the Ovaries-eez.

Sellout at the Jazzhaus
8:30 p.m.
FRIDAY AND SATURDAY
This is a special two-day appearance from one of Lawrence’s most danceable bands.
The band features fun covers and an impressive stamina, all while donning costumes. The female vocalists are the ones who really tie this together and increase the fun by about 1,000%. 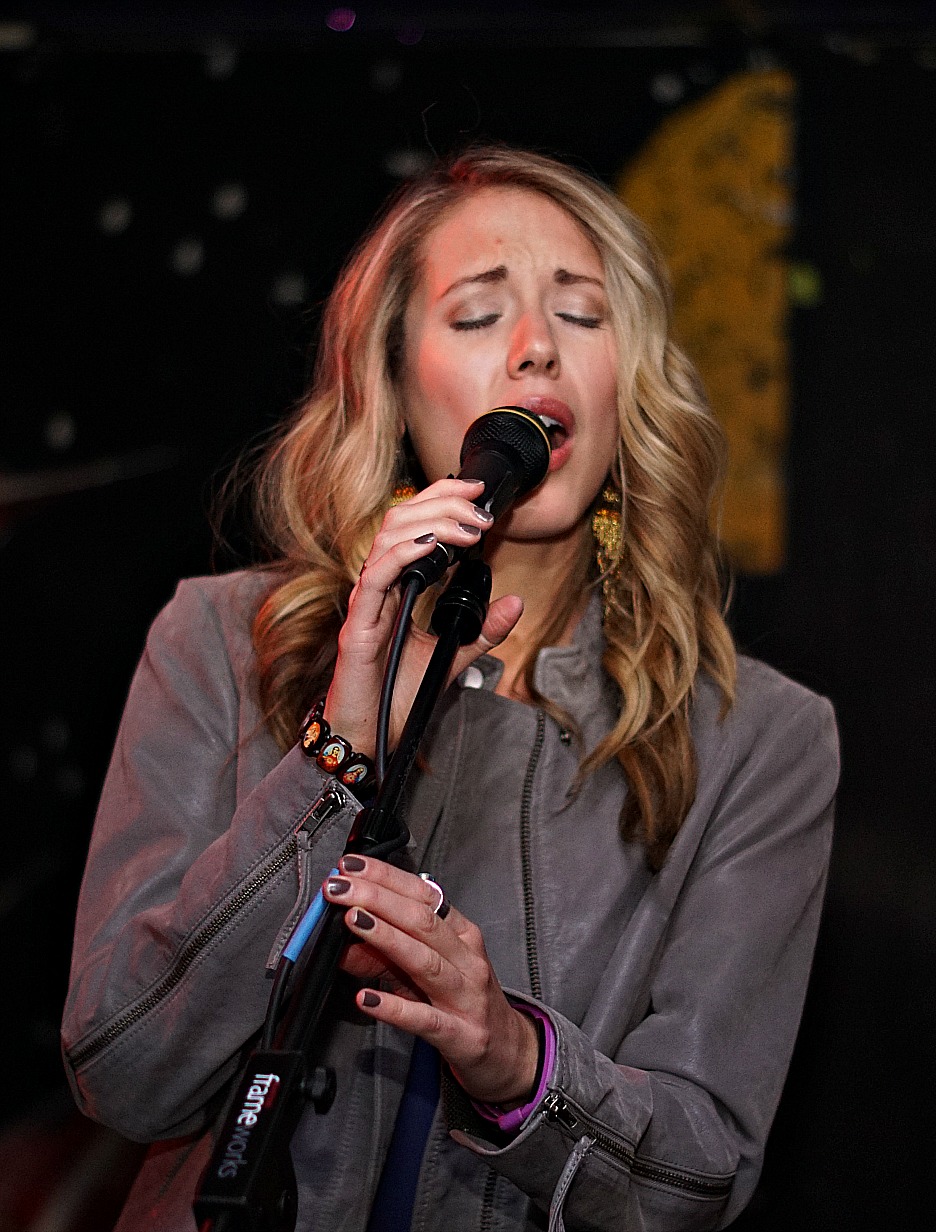 From their event page:
For Maria The Mexican principal Maria Elena Cuevas it’s not about her…then again, it is. The band is actually named for Maria and sister Teresa (Tess) Cuevas’ grandmother, Maria Teresa Alonzo Cuevas, a pioneer in Mariachi who in the 70s founded Mariachi Estrella, one of the first all-female Mariachi bands in the US. The band eventually performed for more than 30 years but tragedy struck Mariachi Estrella in 1981 when seven members were killed in the Hyatt Skywalk collapse in Kansas City. Following the accident and grandmother Teresa’s recovery, the band resumed performing and in the early 2000s granddaughters Maria and Tess, who learned Mariachi and other traditional Mexican music from their grandmother, performed with her in Mariachi Estrella as youngsters – Maria singing and playing guitar and vihuela, Tess singing and playing violin. Perhaps the most important musical legacy of Mariachi Estrella’s final years after the Hyatt tragedy was the indelible musical imprint placed on the Cuevas sisters by the experience of performing traditional Mexican music with their grandmother. 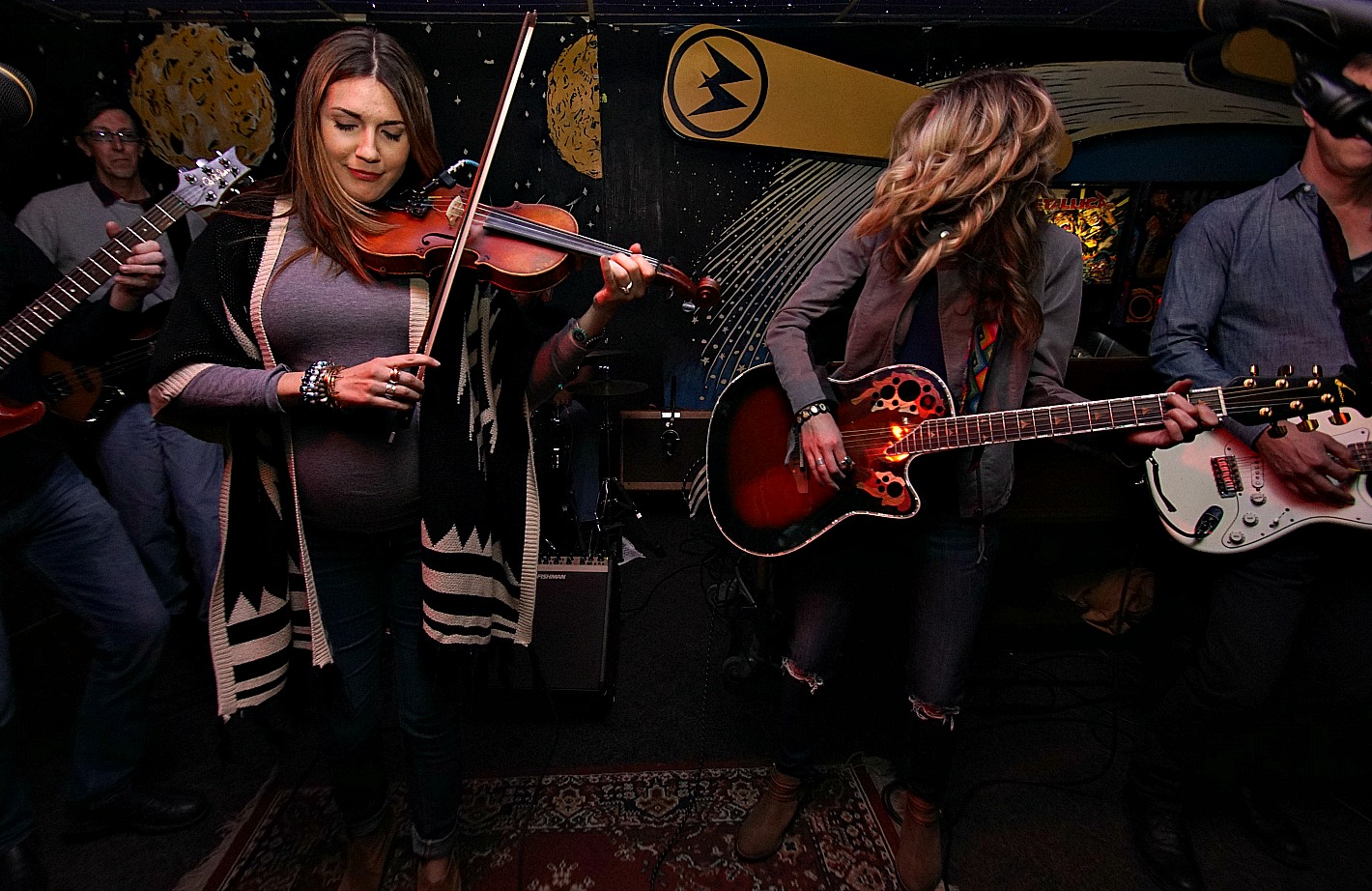 “My grandmother taught a lot of people about this music – other family members, university students, certainly my sister and myself, but there is a whole universe of people who were so generously and positively influenced by her,” said Maria. Now for the “then again, it is” part. Today Maria Cuevas is lead vocalist and guitarist playing acoustic, electric and traditional Mexican stringed instruments for MARIA THE MEXICAN – a Mexicana/Americana/indie blues rock/funk/soul fusion – a true hybrid of Mexican folklore and rock ’n roll delivered in both English and Spanish. Founded by Maria, sister Tess (vocals and violin) and guitarist / songwriter D. Garrett Nordstrom (a veteran of the KC/Midwest club scene with 3 releases by the alt-R&B group The Garrett Nordstrom Situation) MTM is at work on a new release to follow up “Moon Colored Jade” (2013) and “South of the Border Moonlight” (2016) with plans to tour after the new album’s projected Fall 2018 street date.

On stage there is an amalgam of traditional Mexican and American rock instrumentation – drums, bass, electric guitars, acoustic guitars, traditional Mexican stringed instruments, pedal steel guitar, congas and percussion, trumpet, keyboards. And a passionate delivery of American roots music forms dosed with traditional Mexican harmonic and rhythmic influences alongside traditional Mexican music – Mariachi, Cumbia and more. The repertoire comes to life with original music – from incendiary love songs to social and political commentary – written and arranged in collaborations between Maria and Garrett Nordstrom and penned in both English and Spanish.

From their event page:
Youngblood Supercult are an American stoner rock band from Topeka, Kansas. They have been categorized as hard rock, stoner rock, and heavy blues. The band was formed on the desolate plains of Northeast Kansas by the four original members – Bailey Smith, Weston Alford, Coder Potts and Wyatt Desch.

Following the release of their debut album Season of the Witch, Wyatt and Coder left the group and the band were joined by their current vocalist, David Merrill. This transition resulted in a departure from their previous driving heavy rock sound in favor of experimenting with elements of folks, blues, psych, and droning, flat-tuned, off-time riffs which resulted in their critically-acclaimed sophomore albums, High Plains, released on February 19, 2016.

More recently, the group picked up bassist Brad Morris in an effort to expand the band’s musical capabilities. In the spring of 2017, they finished recording their third studio album, The Great American Death Rattle, which was praised upon release as one of the premier stoner rock albums of the year.

This isn’t in Lawrence but features so many local musicians it is definitely worth mentioning. Also, a woman spearheads the entire series.

Matt Suggs, Mercedes Lucero, Suzannah Johannes, Jeffrey Stolz, Alex Chanay, and Dustin Kinsey will back each other up for a lovely evening of music, poetry, and friends.

Doors open at 7:30, and the show starts at 8:30pm sharp. Take a country drive to enjoy this lovely space and amazing cocktails.

Folk in the Flow & Sugarfoot Detour for the Fiona Project
6:30 p.m.
Unity of Lawrence, 900 Madeline Ln

From the event page:
Join Folk in the Flow & Sugarfoot Detour for a special night of original music in honor of The Fiona Project, and 100 Thousand Poets for Change (Global) 2018!

This is an event you won’t want to miss! These two groups have been looking forward to playing together for quite some time now. Come listen for your favorite songs and enjoy an evening of fun and inspiring music with friends & family.

ABOUT FOLK IN THE FLOW:
Folk in the Flow is connecting to audiences of widely varied backgrounds and generations as they travel nationwide. It is the essence of original music, written from a deep place of understanding that wakes the healing tones. This multi-dimensional music traverses genres, with soulful lyrics, blended harmonies & colorful soundscapes. We are historically keepers of the stories of life. Writers and musicians have long held the wealth of being the closest to human nature. To see, feel and bring understanding through the heart is our calling. Music is the undeniable response.

ABOUT SUGARFOOT DETOUR:
At its core, Sugarfoot Detour consists of four people who simply enjoy listening to and playing good music. SFD has well over 100 years of musical experience in genres ranging from classical to jazz to folk to rock. Each band member brings an important texture to the collective sound, providing for a unique take on venerated standards and original compositions.
“NO MATTER WHAT LANGUAGE WE SPEAK, WHAT COLOR WE ARE, THE FORM OF OUR POLITICS OR THE EXPRESSION OF OUR LOVE AND OUR FAITH, MUSIC PROVES: WE ARE THE SAME.” – JOHN DENVER

THIS CONCERT IS PROUD TO SUPPORT:
The Fiona Project
100 Thousand Poets for Change (Official)

ABOUT THE FIONA PROJECT:
The Fiona Project is a music and arts movement dedicated to child sexual abuse prevention and healing.

ABOUT 100 THOUSAND POETS FOR CHANGE:
Since 2011, 100 Thousand Poets for Change has been working with poets, writers, artists, musicians to help organize events around the world for peace, justice and sustainability. They emphasize the need for INCLUSIVITY and true DIVERSITY in our global network, and offer a global events calendar in an effort to help people connect and to give access to those who often times are marginalized in our creative communities. (http://www.100tpcmedia.org/100TPC2012/events-2/)

If you’re a woman (fuck yeah!) and you’re playing a show this weekend, send us the link and we’ll sure as hell list it.

Tyler Gregory adopted a squirrel and we are here for it