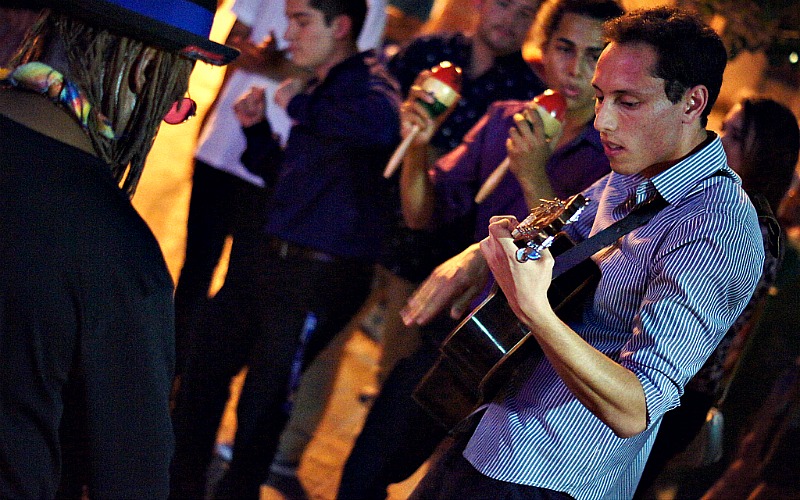 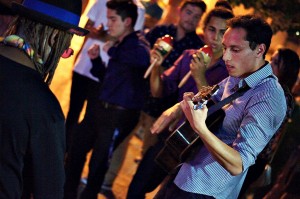 If you were downtown on Friday evening, then you couldn’t have missed it. Even from blocks away, you could hear the commotion.

Washboard player Barry Barnes and his troupe of buskers have been playing on the corners of Downtown Lawrence for more than a decade, but on Friday they experienced something completely new. The already noisy, delightful, and gregarious group of buskers were hitting up their usual spot near 8th and Massachusetts for a night of dancing music and hat tricks when a large group of exchange students from Costa Rica found them. The students had just completed their time at the University of Kansas, and were set to go back to their country on Saturday. So naturally, they were in a great mood. 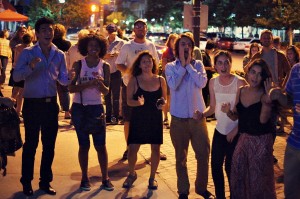 When they found the buskers and their jovial tunes, they broke out in dance. Yes, a lot of people tend to boogie around the buskers downtown, but this was something else. This group was so large that they took up the entire sidewalk and then some. They formed a dance circle, busting out the kind of salsa moves you’d normally see in movies. They were especially buoyant when they dived into a limbo line. When they started line dancing, that’s when every other bystander around joined in.

It lasted for so long that when the buskers wanted to take a break, one of the students picked up a guitar and started playing “La Bamba.” It didn’t take long for the band to join back in, and then everybody sang along.

Here are a couple of clips from the animated evening. Even on the hottest of summer nights, it was a grand reminder of why living in Lawrence is just so magical. At the end of the event, a bewildered Barry Barnes told us “Of all the times we’ve been doing this, this was the awesomest!”

Everybody starts singing “La Bamba” halfway through the clip.