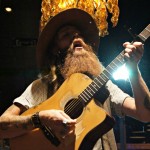 Five Bar has only been alive for a couple of weeks, but it is already etching its name in Downtown Lawrence as the hotspot for live bluegrass and folk music. In the daytime, they host Lawrence’s finest jazz bands (including the Dan Pem band), but as the sun dips into the horizon the musicians who really know hot to throw down come out.

Last week, the bar hosted Monzie Leo, and this week they opened their doors to another one of Lawrence’s most beloved performers. The air was already full of electricity when Tyler Gregory started setting up his signature suitcase, where his tushie would remain firmly planted for the evening (and his boots would be pounding the box right under it).

With his glorious locks of golden hair and a full, healthy, and voluptuous beard, the performer with a heart of gold and a smile as wide as Mass Street emanated only the most heartwarming and pleasing sounds from his guitar. His vocals hollowed throughout the alleys of downtown, beckoning the game-day crowd to come in (you’ll notice some very excitable and happily-tipsy KU girls cutting a wild rug at about four and a half minutes into the first video). 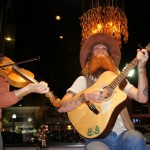 At the beginning of the show, just about a dozen or so music lovers were comfortably seated in the tiny bar-turned-venue. But it didn’t take long for Tyler Gregory and his incredible stamina to work his magic. Joined by a fancy fiddler and a boisterous bassist, he had that place filled (overflowing, even) with fans within the hour. The room was now spilling out happy clapping and stomping revelers into the street. There’s something about Mr. Gregory that just brings out the very best in people. Even the overly drunk game-day attendees turned their obnoxious antics into good-natured dancing and high-fives.

Bonus video! Here’s T-Gregs performing an a capella number that made an entire crowd fall silent. Behold, the glory of his heavenly voice. The performance was so moving, you could almost see a halo forming above his head.