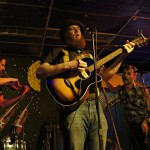 While we were all suffering from the oppressive Kansas heat over the summer, Mr. Monzie Leo (of Monzie Leo and the Big Sky) found himself on a whirlwind tour of the calm and cool Pacific Northwest. While he was up there, he worked on some new music and has finally returned to Larryville with some goodies for us.

The raspy folkster just released this song, which he says is “about many dear friends lost to drugs and alcohol.” We’ve been promised more songs to come, but in the meantime enjoy this number from Monzie Leo and the Northwest Two.