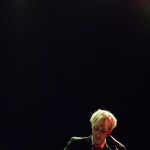 Liars at the Granada

One of the best parts of large touring shows is the back line. Some bands are very secretive when it comes to showing the audience what their stage set up looks like. Liars’ show at the Granada had nothing to hide. This three-piece band had an extremely minimalist approach when it came to the vast soundscapes that were about to explode from the speakers. Perhaps minimalist is not the appropriate word, let’s just say their stage set up was tasteful. Everything that was onstage served a purpose and would be utilized in the best way possible throughout the night.

After the two wonderful opening acts, Major Games and Cadence Weapon, had finished, Liars appeared out of nowhere. Judging by the tense nature of everyone standing within thirty feet of the stage, the audience was ready– or so they thought.

Synths hummed atop the clicking of electronic drum samples.Their drummer played a hybrid kit that consisted of acoustic drums and a drum pad that simulated tight clicks and other useful accents. Straddling the heartbeat of center stage were the two legs this musical creature would travel upon. Tables filled with what one can only assume were synthesizers and mixing boards, emanated sounds on par with experimental science fiction film sound tracks. Dark tones were only enhanced by the dark presence pouring over the edge of the stage. 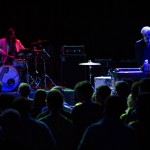 Liars at the Granada

With each added layer, the monster that Liars was creating grew and pulsated. It was consuming the interior of the Granada until every crevasse was filled with distortion and pounding rhythm. Members of the audience convulsed as if their bodies had been struck by a lightning bolt of sound, traveling through every inch of bone in their body before exploding out of their feet.

Opposite of a T-Rex, the giant Liars monster couldn’t see its prey if the audience kept moving; it was the only way to ensure safety. Certain sounds that emanated from the stage could drive the average person up the wall; but somehow, Liars managed to pleasantly manipulate the shrill audio. A dance was happening, between the musicians, the strange sounds, the steady beat, the audience and their movements. This audio orgy climaxed into the loudest show I have been to in years. Intensity roared from the floor to the rafters, leaving no escape for anyone in the building. You may not understand it, you may not like it, but you were going to hear Liars; there was no mistake about that. After all was said and done, I think everyone just needed a cigarette.

See a photo gallery from the night here.