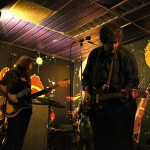 It may have been painfully cold outside, but there was no shortage of badassery on Saturday night. Bloodbirds is a new band (sporting members of Ad Astra Arkestra), but they’re already leaving quite an impression on the Lawrence music scene.

We love Bloodbirds because you get all the grungy benefit of garage rock, but are still treated to fairly captivating and groovy tunes. The baselines were so catchy they loosened up even the stiffest of Replay crowds. The audience grew and gave the band a warmer reception with every passing song. 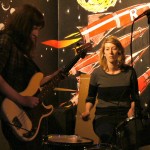 Mike Tuley’s guitar skills could slay a dragon. He’s also no doubt one of the best screamers in the scene, and he calls upon that talent with Bloodbirds. Yet he still manages to restrain it (just a bit), giving us a small taste of his murderous roar. What a tease! He doesn’t leave us empty handed for long, though, because shredding and thrashing were bountiful.

If your weekend didn’t leave you with enough rock, here’s a track the band just posted off the new demo tape:

Next post Photo Gallery: Tom Petty and the Heartbreakers Tribute