We don’t get treated to bands from other parts of the state too often, but on Friday night three bands from Central Kansas (and one from Oklahoma) brought a taste of their regional rock to the Bottleneck.


Andrew and the Dudes

Andrew and the Dudes started their set by telling the crowd “This song is about corn nuts.” They then dove into a screamy rant of a set. The Manhattan-area band came armed with a new guitar player who was still in the process of learning the songs, but that didn’t stop him from shredding and getting the crowd pumped.

The group’s skinny frontman had a strong set of lungs that were perfect for screaming. When he wasn’t yelling into the mic, he head banged while fans huddled to the front of the stage. He was a charismatic one, and even got some fans in the back to clap along. At one point, the crowd jumped into a very short-lived mosh pit. Their set was no longer than 20 minutes.


Don’t Give Up The Ship

Don’t Give Up The Ship is a very energetic pop band from the Wichita area. They love audience involvement, and the audience likes it too. They were really good at rallying fans to clap and sing along.

Both guitarists took turns on the vocals, although one was considerably more showy than the other. I was surprised to see them pull out a vocoder of some sort for a couple of their songs. That’s definitely something you don’t see in these parts. However, I could see this band leaving the poppier sound and taking a dancier route as their music matures. For now, we’ll just have to play the waiting game.

Speaking of heavy audience interaction, Abandon Kansas had some very dedicated fans who loved to sing along to several of their songs. Not that the band needed the help; the lead singer had a stunningly beautiful voice.

Abandon Kansas loved connecting with their audience, and always stopped to converse with the crowd between songs. The band also loves covers, and peppered a few of those in between songs off their prior albums. They also treated their fans to a brand new song, Chariot, which we’ll most likely hear on the new album they’re currently recording.

The band spends quite a bit of time on the road. They’ve toured extensively int he past, but this was their first performance in Lawrence in more than year. They told me they plan on touring more regionally over the next year, and have a show coming up in Kansas City.

Editor’s Note: The Average Black Bears also played and opened up the show on Friday night.

Here are a few more shots from the Abandon Kansas set: 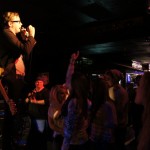 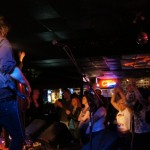 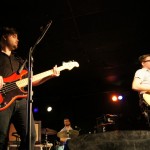 Shows you should see this weekend: January 6-7