Editor’s note: local music enthusiast Valerie Skubal headed down to the Jackpot last night to watch Joan of Arc / Air Waves / Muscle Worship / Generals. She decided to contribute a review to I Heart Local Music. Here’s her account of the show:

Newbies to the local music scene, having only played their first three shows in town this past week, Generals members are John Hermes, Sean Rosner, Nathan Dixey (you might know him from local band Colony Collapse) and Zack Lansing. Their short set consisted of lengthy but soothing guitar heavy songs filled in with harmonies from Rosner and Hermes. 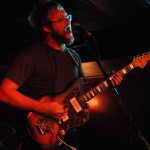 The crowd began thickening up as local veterans Muscle Worship took the stage. The energetic, and at times, ear-busting set had people bouncing and getting caught up in the music. Their stage presence is something to acknowledge as they always appear to be getting lost in the music themselves.

The Brooklyn based band Air Waves made their first stop in Lawrence, singer and guitarist Nicole Schneit mentioned that she thought Lawrence was “beautiful.” Though the vocals seemed shy at times, the band itself had a very eclectic feel to them as some songs were hands-down indie-pop but surprised me by transitioning into a more twangy country feeling. But for as poppy and catchy as some songs
were, they were equally as dark and melancholy at times.

Finally the crowd was not shy when legends from Chicago, Joan of Arc, hit the stage. There were die-hard fans piled up to the front waiting to hear their favorite songs. The band started off with songs from their newest album, being released next week, and then transitioned into the older tracks that the crowd was familiar with. Interrupted often by crowd banter, singer Tim Kinsella took it in stride. After commenting on how Kansas was “South” to him, the crowd corrected him and made fun his Chicago accent. It seemed all in good fun and the show went on with the crowd getting more excited with every song.

Overall, even though the night got off to a slow start, the crowd showed more energy as the night went on, most likely clinging to the nostalgia of their youth hearing Joan of Arc live after being a very influential band for over 15 years.

To view a photo gallery of this show, click here.