Do you like loud music? Then go see Rooftop Vigilantes

Do you like loud music? Then go see Rooftop Vigilantes

The Taproom may at times seem small, cramped and poorly lit, but on Friday night it was the perfect place to release your work week anxiety with some seriously loud music. 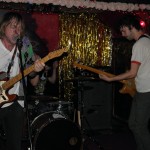 One of the members of Rooftop Vigilantes made sure everyone was well aware that it was the weekend. “I want everybody to stand up! I don’t sit DOWN and play this bass guitar! Stand up! It’s Friday! You can sit down on Monday!” There is nothing quite like a Rooftop Vigilantes set to release melt your face off. The garage rockers played so hard that they broke a string and heckled the crowd while they worked to remedy the situation. Even their “slow jam” was fast paced and upbeat.

By the time The Dead Girls took the stage (or corner, rather) the Taproom began to fill out. When they started their set I noticed some seriously excited fans dying to head bang (but not quite going there) and throwing up the horns every now and then. 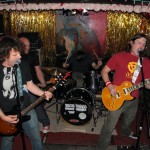 In Lawrence, you’ll see a lot of indie rock bands. But The Dead Girls are one of the few that can get away with a poppier sound. The band rocks out, but they’re also full of good nature, constantly throwing out jokes between song. Even drummer Eric Melin will occasionally flash his signature goofy smile in between his serious rock maneuvers.

But at least they were loud. Because as far as I can tell, most folks at that show look like they had one heck of a stressful week and had “To hell with it all!” written all over their faces.

The Black Angels are going to melt your brains