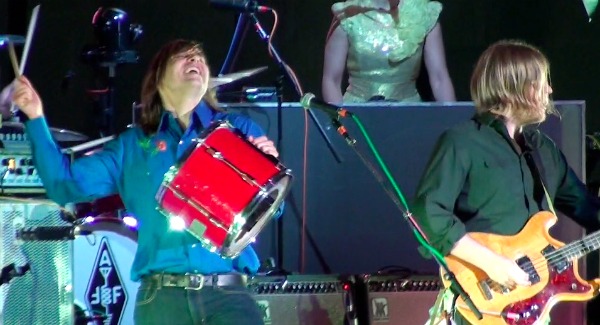 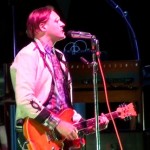 Right as the Arcade Fire was taking the stage at the Starlight on Wednesday night, something lit up the sky. I’m not sure if it was a shooting star or a firework, but it was shimmering and magical, and it set the tone for the rest of the night.

The band exploded onto the stage with “Month of May” and “Ready to Start.” They played under a huge marquee with streamers strung about the stage.

Win Butler wasted no time making friends, and made his way into the middle of the crowd by the third song, where he stood amongst his adoring fans and belted out a few lines before returning to the stage. 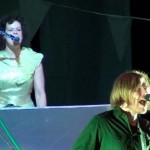 Régine Chassagne was wearing her signature sparkly gold dress, and lured us in with her high-pitched, angelic and enticing voice. The woman has the voice of a siren.

Every sound that came out of the stage on this night was part of a delicate puzzle. The audience heard all sorts of interesting little noises, sometimes I wasn’t even sure where they were coming from. All sorts of instruments made their way onto the stage. Half the band busted out maracas for “Rococo,” which may very well have been the most intense, emotionally-charged song of the night. Never have I heard such a wonderful use of crescendos and percussion. 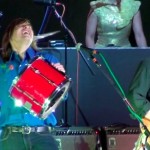 About every four songs they would stop to tune their string instruments, which made me feel like I was at a fancy symphony. I might as well have been, because these songs and performances were a work of art.

Just before the encore, the band played a stunning rendition of “Wake Up,” and the lights burst onto the audience as they belted out the words in unison.

The show may have been general admission, but the chairs were left in bolted to the ground, and the front area was reserved. Right as they started the encore, Win yelled out “I know there’s chairs and shit, but we saved a couple of dancing ones. You guys can move your ass and shit!” He also invited the audience to come up close to the stage, but most were blocked by security. 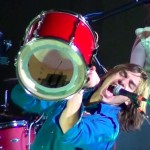 The Arcade Fire delivered a dazzling and radiant show that we will never forget. Folks streamed out of the Starlight smiling so hard that they’ll probably wake up with those grins on their faces in the morning.

Previous Article A colorful commotion: Dangerous Ponies at the Replay