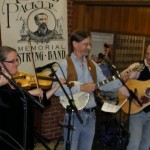 There is no other reason in the world to look forward to Tax Day other than what happens every year at the Downtown Lawrence Post Office. The Alferd Packer Memorial String Band throws a party at the post office for last minute tax filers. 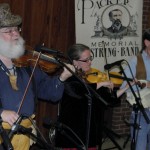 Back in the day when you actually had to mail in your taxes, this was an all-out blast that ran until midnight. Folks would come out, make food and dance until the post office locked their doors and kicked everybody out.

But now with e-filing, nobody makes that mad dash to the post office anymore. There is no great weight off your shoulders, but everyone here still feels the need to party. So they kept the party going. Now the postmaster locks the doors at 5:30 p.m. and lets the band play until about 7:00 or so. But they still line up and form a gauntlet while playing “The William Tell Overture” as folks rush to the post office during the final minutes of the day for whatever reason. 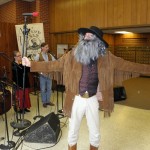 On Monday night Matt Kirby decided to have a little fun and do his own impression of John Brown.  Only instead he swapped out the Book for some sheet music and a mic stand replaced the gun.  Armed with rhymes and scientific riddles, he was ready to take on his audience.

This year, Channel 6 showed the Tax Day Party live on television, and live streamed nearly the entire celebration online. You can watch the clips by clicking here. I work at Channel 6 and was thrilled when they announced that we could show the Tax Day Party live during the newscast, even though we were a bit short-handed at the time. God bless ’em!

Next year will be the band’s 25th anniversary for the Tax Day Party. Every year I keep coming back. Is it because of Matt Kirby’s quirky jokes, Steve Mason’s hearty laugh or Mike Yoder’s adorable smile? I’m not sure, but once you’re in, you’re hooked. And who knows how long this party will keep going, so get out there while you can.

See you next year.