A Tale of Two Venues

On Friday, I was torn between two stellar shows. Both had great local lineups, but make no mistake about it, these were two very different shows.

I started the evening at the Bottleneck, where Oils, Elevator Action and Fourth of July were taking the stage in an event sponsored by student-run radio KJHK.

Oils may be just a two-piece band, but they play with a lot of heart. Their songs are packed with catchy little choruses, and the singer sure has a pretty voice. I love bands that do a lot with a little, and Oils definitely takes a page out of the “less is more” book. Plus, I couldn’t help but notice that all the honeys sure seemed to like this band.

Spirit is the Spirit 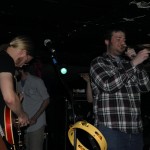 I braved the freezing wind and mist to make it over to the Jackpot. Spirit is the Spirit was the first band to go on. As soon as I stepped foot inside the venue, it felt like an entirely different world. Red lights were featured on the merch table and onstage, incense burned in every corner of the venue and the band on the stage looked like they stepped straight out of the 70’s. Groovy.

Don’t let the hippie appearance fool you, this band makes some seriously beautiful music. They just laid into it, attacking all of your senses (this is where the incense helped) and surrounding you with beautiful, spacey music. The band might seem a bit goofy at times, but their songs are gorgeous. 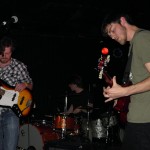 Back at the Bottleneck, I discovered that Elevator Action really likes to light a fire under your butt from the get go. I’ve seen these guys play before, and they were really on their game tonight. They exploded into their set with a beautiful, epic song. The singer has one of the most explosive voices the scene has to offer. It’s so wretched with emotion that it breaks your heart just a little.

Here’s what they opened their set with: 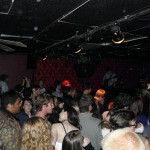 By the time Quiet Corral had started their soundcheck, the Jackpot was a three-ring circus. As soon as you opened the door to the Jackpot, it felt like a sauna. The place had to be at capacity, or close to it. The crowd was outrageous, but they were all extremely happy and in a good mood.

If you were lucky enough to make it to the front, you could barely move your arms. I managed to find a perch up against the wall, and watched as the crowd scream nonstop at the stage during the soundcheck. When the band finally started playing, the audience was elated. They boogied (with what little room they had) and clapped along to the music. Quiet Corral, as always, sound perfect. I am always wildly impressed with their musicianship, pitch-perfect singing and massive stage presence (there’s a bunch of them onstage, including two drummers). But alas, the crowd was too overwhelming for me and I had to leave. The Jackpot had chewed me up and spit me out. 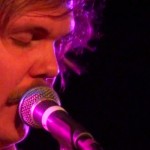 Honestly, sometimes there is no finer place to be in Lawrence (or in Northeast Kansas, for that matter) than a Fourth of July show. This place was CHILL, and nothing but familiar faces were in the crowd. You had your good friends, your scenesters and of course the folks in other bands that you just saw play a couple of days ago.

I’ve said it before, and I’ll say it again (with pride). There is just something so nice and familiar about Fourth of July. The guys never overdo it, and yet it always comes out as a wonderful show. Folks danced during the faster paced, poppier songs, and swayed during the slower ones. The band even got the bottleneck to get the disco ball going a couple of times. 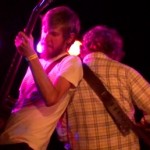 The bottom line: Fourth of July is just fun to be around. And isn’t that all we could ask for in a band? With two sets of brothers in the band, maybe that’s why they always feel like family to me. And besides, it’s always so damn cute when they do that thing where they play with their backs leaning against each other.

Fourth of July, you are my boo (and everyone else’s, too).