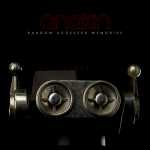 I have to admit, I’ve been sitting on this review for a while trying to figure out an angle on a record I’m frankly shocked by, Anakin’s “Random Accessed Memories”. Full disclosure, I’m a huge Star Wars nerd. Maybe I’m thinking about it too much since that awful thing called a movie got rereleased this weekend. That being said I’m not a man lacking taste. The prequels are the terrible, horrible, no good, very bad days of nerdy film. Star Wars prequels ruined who Anakin Skywalker is in making him a silly, hyper emotive shithead; when the fans of the originals imagined him as a star bound tragic, romantic warrior-hero who was seduced and ruined by a destructive power. But damn if the band Anakin hasn’t filled in that role. “Random Accessed Memories” (heretofore RAM) is a stunning, lost-in-space love letter that swells and blooms, while simultaneously rocking balls, sounding unlike anything I’ve heard in years.

RAM opens with Action/Reaction; a simple chord, a cymbal smash, a breath, and then positively rips into the piece. They immediately introduce what you are in for with the record; pile driving power chords that slam away at a point over a driven, directive rhythm section. It’s immediately shown that the band is presenting a purpose, something painfully rare in modern rock music. These guys have a fucking point they are trying to get across. Without being overly brutal or immaturely fast, this is heavy from the start, almost plodding along a set path. However the vocal delivery is gentle, pointedly direct, delivering primary lines like, “The sun explodes with you / It’s visible and true / When it’s over / We’ll strip the layers away”. Simple, pure, and heartfelt from the very start. The first song’s 4 minutes seem to go by in a matter of seconds.

The message is reflected through the record in tone and delivery. The record travels at light speed across soundscapes that are so patient and introspective, so perfectly punctuated with impacting drum fills and keyboard melodies, with HUGE guitar lines that hold their foot steadily on the accelerator while the rhythm section maintains total control. When the band does decide to break loose into a chorus or accent mark the speakers absolutely burst with fuzzy, awesome, star exploding moments. This is a record that almost demands a loud listening experience, but doesn’t reject the intimate headphone session if the listener needs it. It’s a rare treat to hear a record that you can have a quiet moment with but can also blast at searing volumes and have the same emotional reaction.

The band, a simple 3 piece, delivers an extremely well informed set of songs. They found a perfect production team, with impressive engineering work from Eric Graves here in Lawrence recording what must have been countless guitar lines, and great mixing work by Joel Wanasek in MI. They use vocal lines that are similar to Deftones or Failure at their best, and I haven’t heard a band that can deliver fretted harmonic melodies like this since Hum (although I may be swayed, since the band got the honor of delivering a cover of the titular song from their ground breaking “You’d Prefer An Astronaut” on the Hum Tribute: “Songs Of Farewell and Departure”). Keyboard themes run though songs that are reminiscent of The Rentals debut album. Also in the Weezer family of song writing, Anakin busts out some of the best use of (pardon guitar nerd terms, here) proper power chords with the lower 4th included and spider chords I’ve ever heard. I mean that. Ever. I only invoke Weezer because these guys have put the Blue Record to shame. Imagine “My Name is Jonas”, and then throw that old shit out the window. It’s the simplest way to deliver power and drive without beating your listener into submission.

And that’s the key to the record. Anakin never forces anything upon it’s listener. It’s a heavily delicate piece of work. There’s no bravado to be found here. It’s a love letter from a hulking, sorrow filled Juggernaut, stating, “I wish I never loved you” (as in “Runtime Error”). It’s a cosmonaut lost in space, lonely, trying to calculate where he went wrong. It’s a couple realizing that they may not actually be passionate about each other, but dammit they hope they can find it again because they miss each other. It’s a document of romance and longing, within and without relationships. But it drives on, constantly moving with dedicated urgency. It’s a stunning debut.