No Joy / Mouthbreathers at the Jackpot

No Joy / Mouthbreathers at the Jackpot

Yesterday may have been Friday the 13th, but it was my lucky day because I got to see two stellar acts at the Jackpot. 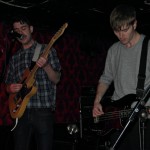 Local band Mouthbreathers were the first band to take the stage. I was stoked like crazy because I had heard good things about the band, but this was my first time seeing them. Well, it didn’t take long for them to impress the pants off of me. The band wasted no time showing just how fast and hard they could play, and within 30 seconds people started appearing out of nowhere and surrounded the stage. The Jackpot had been pretty sparse up until this point.

At the beginning of the set, the drummer pointed to his drum set and joked “This thing sounds like shit, by the way. I apologize.” That guy had no reason to be sorry, because he was by far my favorite part of watching this band. He tackled each song with such vigor, his eyes full of intensity and his hair bouncing wildly all over the place. It really is a treat to see just how heated he can get.

But don’t worry, he doesn’t overshadow the rest of the band. Each member brings their own intensity to the performance. I loved that the singer could stand so still while screaming with such passion into the mic, his hands flying up and down the neck of his guitar. Even though everyone in the band played fast and hard, it still felt like they had an even crazier rocker waiting to bust out. Color me impressed. 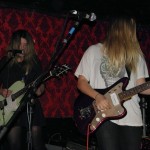 Before Friday night, I had seen No Joy twice this year. Once in Omaha when they opened for Best Coast, and another time at the Jackpot at the very beginning of the year. The last time they were here, they had that too cool for school vibe, and I absolutely ate it up. There were just a handful of people at the show, and I was bummed that more people weren’t there to take in the fantastic set.

I rarely get to see women who can ACTUALLY play guitar. That’s why I love watching this band. These women can shred while splitting their time between crooning into the mic and hunching over their guitars. Shoegaze is making a comeback, and I found myself happily encased in No Joy’s wall of noise and fuzz. It’s not every day you get to see women in this sort of role. 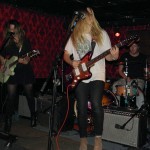 I was also impressed with the change in attitude. When they were here a few months ago, they kept to themselves and were pretty quiet. I never even saw their faces (although hiding underneath their golden locks of hair is kind of their trademark). But on Friday, they were fairly outgoing. They held their heads a little bit higher, and I couldn’t help but notice them mingling with the fans back at the merch table. I’m glad they appeared to be having a good time. Hopefully, they’ll find a reason to pay us another visit here in Lawrence.

Check out the video at about one minute in. Is that a smile I see?

Editor’s note: Vivian Girls headlined the show, but we were unable to catch their set. Nonetheless, we are impressed with the stellar lineup that was brought to the Jackpot.

Hospital Ships takes it to the streets

House Show: I Don't Give A Damn