If you participate at all in Lawrence night life you’ve seen Jeremy Nesbitt, although he wasn’t hollering at you from a microphone. There’s definitely something enigmatic about this figure who has lingered in the Lawrence music scene since about 2004, when he released From the Huge Silence featuring just about every rapper around, but whose voice I don’t think I’ve ever heard. However, he’s made notable contributions to local music. He put himself on the Lawrence map as a beat maker back in the day when producing an independent album was more of a daring feat, as I remember – and with steady releases he’s been a figure in Lawrence hiphop ever since. 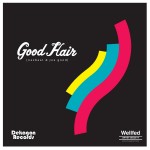 Good Hair, released April 2011, features Nezbeat with Joe Good, Approach, Tajai, Chris Handley, Patrick Hangauer, and Johnny Quest. How lucky is Lawrence to have an ensemble like that in its pocket? Good Hair raps hard while Nezbeat makes it sound easy. It’s summer time. Every activity is made for loud beats. Why not rock these tracks and let the Lawrence sounds reverberate?

Hospital Ships takes it to the streets